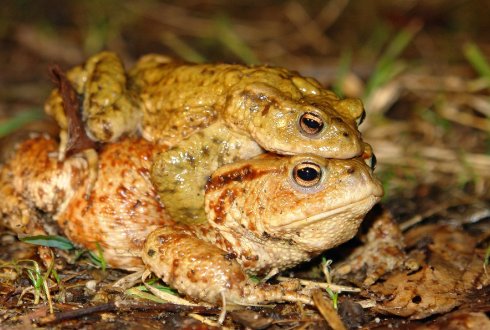 Building toad tunnels under roads helps toads to cross what would otherwise be deadly thoroughfares. However, if you want to know how effective they are, you have to look not only at how many animals use the tunnels, but also how many do not. Fabrice Ottburg and Edgar van der Grift have explained the importance of their study in a YouTube video.

In the springtime, toads leave their hibernation spots in the woods and migrate to their mating pools. Many toads are killed as they cross roads. For this reason, volunteers help to move the toads across the roads at various locations. Until 2010, Fabrice Ottburg had been coordinating such a project with volunteers in the municipality of Ede. With the aid of screens placed along the roads, the toads were guided towards tunnels that delivered them safely to the other side. This study showed that many toads made use of the tunnels.

“However,” say Fabrice Ottburg and Edgar van der Grift, “it’s not only about how many animals do use these wildlife crossing structures, but also how many do not. Only by determining this you can indicate just how effective the tunnels are.” And so, in 2013, they individually marked all the toads they found nearby the screens on one side of the road, and in doing so discovered that out of approximately 800 toads, only around 300 reached the other side by way of the tunnels. The researchers felt that although this meant the tunnels work, they were not working adequately. They then used this information to draw up guidelines on the number of tunnels that need to be built per kilometre of road in order to effectively guide as many toads as possible from their hibernation spots to their mating pools.

The video was made as part of the Saferoad project that focuses on providing greater insight into the functionality and effectiveness of wildlife crossing structures. See: www.saferoad-cedr.org