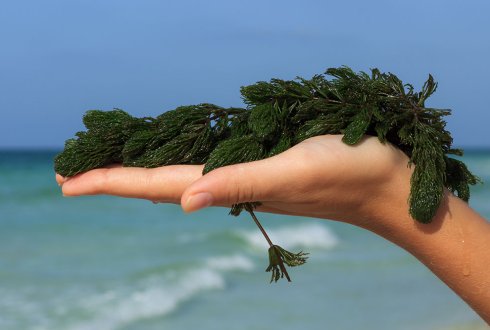 Scientists at Wageningen Economic Research Wageningen University & Research have analysed the environmental impact of making plastic from two kinds of seaweed. They did this by performing a lifecycle analysis already during the experimental phase, and concluded that using algae as biomass is fundamentally more environmentally friendly than using maize or sugar cane. Even so, there is plenty more progress to be made.

Experimental research at Wageningen UR Food & Biobased Research yielded two interesting proofs of concept – the scientists have developed successful processes for refining two types of seaweed into bioplastics. Polylactic acid extracted from Ulva lactuca is suitable as a raw material for biobased soft drink bottles, for instance. And Gracilaria vermiculophylla provides polysaccharides that can be used to make things like plastic packaging film.

The question, of course, is: can seaweed as raw material for bioplastics grow into a fully-fledged alternative to fossil fuels? “Obviously, a prerequisite is that we be able to make production economically viable,” scientist Sander van den Burg of LEI Wageningen UR explains. “But there are also other factors, such as the impact of the production chain on the environment.”

This was precisely the aspect investigated by Van den Burg and his colleagues from LEI Wageningen UR, with the help of the ‘lifecycle assessment’ instrument. “Using this method we mapped out the environmental impact of the entire production chain, from seaweed cultivation to the disposal of the end products. The advantage of this method is that we carry out the analysis while the process is not yet fully developed. That way we can find out exactly which links in the chain have the greatest environmental impact and work on improvements in a timely fashion. This includes different, less environmentally damaging production methods or a better utilisation of residual products.”

The analysis showed that seaweed cultivation has the potential to be very eco-friendly. “Seaweed extracts nutrients directly from water,” Van den Burg says. “Unlike with the cultivation of maize or sugar beet, no polluting fertilisers are used. Furthermore, seaweed cultivation has relatively few negative effects on biodiversity. All of this makes seaweed a very interesting commodity.”

Cultivation still needs to become more efficient, Van den Burg says. “Larger scale production can help, of course, and location plays a role. The seaweed in this study was grown in Portugal, where relatively little energy is generated from renewable sources. This has negative effects on the analysis. Finally, the method of preparation is also important. From an environmental perspective, the preferred method is one which deploys the least water and solvents.”

The scientists also looked at the use of residual products from seaweed cultivation. “Let's say you use 25% of the dry matter in the production of plastics – this still leaves around 75%. The challenge is to process the remainder – for example into animal feed – in a way that produces the highest possible quality. The upshot is that this amount no longer needs to be produced from other types of biomass. And seaweed has the great advantage of not requiring valuable agricultural land.”

Van den Burg and his colleagues have not specifically looked at the cost of plastic made from seaweed. “However, it goes without saying that less energy consumption leads to lower costs for the final product. From an economic perspective, it is certainly wise to consider the environmental impact.”

This article appeared in Wageningen UR's Biobased Economy newsletter. Enter your email address in the box below if you would also like to receive this newsletter.