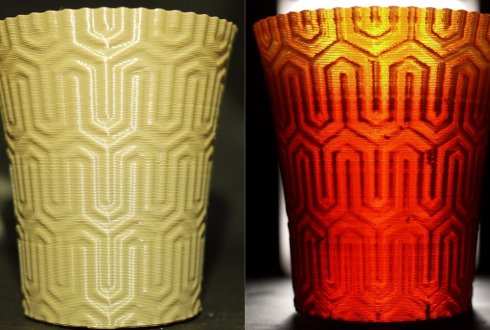 As 3D printing enters the mainstream, scientists are finding remarkable new ways to extend its future promise. Researchers at Wageningen University & Research recently developed a 3D-printable composite that could point the way toward an entirely new world of printable smart materials. It all started with the most spectacular example of ancient nanotechnology, and one of the most enduring riddles in art history.

The Lycurgus cup, dating from 4th-century Rome, is an intricately glass vessel whose colour changes from green to red depending on whether it is illuminated from the front or from behind. This quality, known as dichroism, is unique among ancient glassware to the Lycurgus cup, and earned it a special place in church treasuries and private collections until it was exhibited for the first time in 1862. It wasn’t until 1990, when the cup was analysed by electron microscopy, that its secret was revealed: nanoparticles of silver and gold had been added to the glass to create a remarkable new composite.

Glassmakers have successfully recreated the cup’s effect in its native medium, but in 2019 a team of researchers led by Vittorio Saggiomo set out to do so in an entirely new format. Working at Wageningen University’s Laboratory of Bionanotechnology, they sought to develop a printable nanocomposite that mimicked the delicate colour balance achieved by the Lycurgus cup’s creator.

An effect of silver and gold particles

“We’d already taken inspiration from the Lycurgus cup a year earlier,” notes Kool, a student working on the project, “when we created a 3D-printable dichroic material and printed some cups reflecting simpler designs. As proud as we were of those achievements, they changed from a nice deep lavender when transmitting light to a muddy brown when reflecting it.” Those earlier successes relied on the presence of gold nanoparticles in the composites used for printing. Because the Lycurgus cup contains a 2:1 ratio of silver to gold nanoparticles, the challenge was clear. But the method was not, as silver is much more reactive than gold.

The team developed a new method of controlling the reduction of silver particles and arresting that reduction at the right time for obtaining a precise size of nanoparticles. When a smaller complement of gold nanoparticles was added and the resulting composite extruded for printing, the dichroic properties were remarkably close to those of the Lycurgus cup. Full details of the study are available through an article published in the Beilstein Journal of Nanotechnology.

From curiosity to applications

Dichroic materials are commonly used as filters, where they split beams of white light for use in LCD systems, facilitate microscopy, and create patterns in high-powered lighting systems. When used as mirrors, as in quartz-halogen lamps, they allow high degrees of illumination without the overheating that would otherwise result. The flexibility and control achieved by the Saggiomo’s team at Wageningen opens the way for more flexible and economical production of dichroic materials for traditional purposes, and for the creation of entirely new materials featuring dichroic properties.