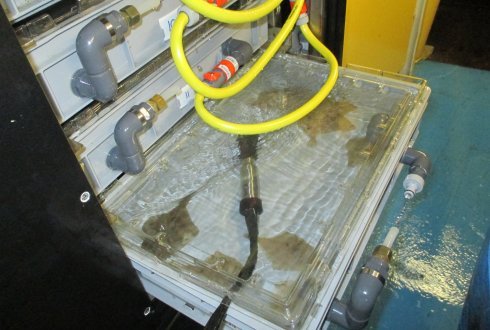 Twenty-nine percent of the undersized common sole caught survive the fishing and processing process. For plaice, this is 15 percent. These findings are from a study into the chances of survival of undersized flatfish in the pulse fishery conducted by Wageningen Marine Research. The research was carried out in connection with the landing obligation and was commissioned by the Cooperative Fisheries Organisation with co-funding from the European Fisheries Fund. It was published in the ICES Journal for Marine Science.

Since the introduction of the European landing obligation, undersized fish (small fish that may not be sold for human consumption) of species subject to a quota, may not be discarded. This fish must be brought onto land. Exemptions can be requested for species that have been proved to have a high chances of survival. For this reason, the Cooperative Fisheries Organisation commissioned Wageningen Marine Research to examine the chances of survival of common sole, plaice and dab in the North Sea. The results from the first study show that an average of 15% of the undersized common sole caught survives, and 29% of the undersized plaice. It is estimated that 16% of undersized dab survive being caught and processed on-board.

The scientists at Wageningen Marine Research carried out the research in line with guidelines developed by the ICES (International Council for the Exploration of the Sea). The undersized fish were randomly collected on-board a commercial fishing vessel both immediately after being caught and at the end of the sorting process. The fish thus collected were checked for damage and placed in a tank with flowing seawater in batches of five. The tanks were then monitored every day and taken to the laboratory as soon as the fishing boat docked. The fish were then monitored for another three weeks.

The majority of fish died within the first few days of being taken on-board. This was probably due to a lack of oxygen or injuries sustained during the catching process. Some fish died several days later from infections in wounds on their skin or scales. The water temperature was another important factor: chances of survival drop if the temperature of the seawater rises. In addition, differences in the chances of survival of both plaice and common sole were noted between the two fishing vessels being studied. It is uncertain whether this is because of minor differences in the way the equipment was set up, the fishing location or other factors. The study also revealed that the chances of survival of plaice is affected by the time it takes to sort the catch. The fish ‘helped’ first are more likely to survive.

The fishing industry has commissioned more research into the chances of survival of (undersized) fish. Since April 2017, studies on commercial fishing vessels have been monitoring whether modified on-board processing and fishing techniques result in higher chances of survival. Research will also be extended to include other species.

Click here to read the results of the research in full.