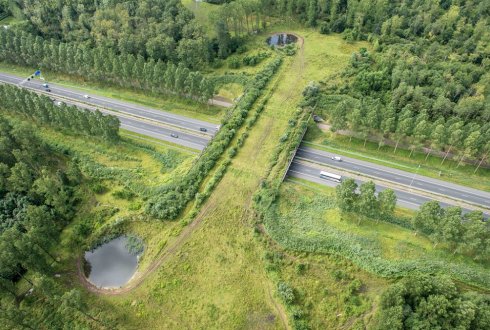 Ecological corridors is a collective term for ways in which wildlife can cross from one natural protected area to another. In the Netherlands these corridors are clearly in the form of ecoducts, such as on the A12 motorway between Wageningen and Utrecht

By the provision of knowledge, Wageningen University & Research (WUR) has played a role in establishing connections between natural protected areas in the Netherlands and Bulgaria. It is possible that a similar project may be started in Israel.

If everything goes according to plan a group of Israelis will come to the Netherlands on a working visit later this year. A visit to an ecoduct will almost certainly be included on the agenda. In addition to Wageningen University & Research, the province of Gelderland is also involved in the working visit.

Louise O. Fresco, president of Wageningen University & Research, is now in Israel at AgriVest. During this international event experts in the field of food and agriculture get together and think about challenges and future solutions.

Read more about ecological corridors in our dossier: