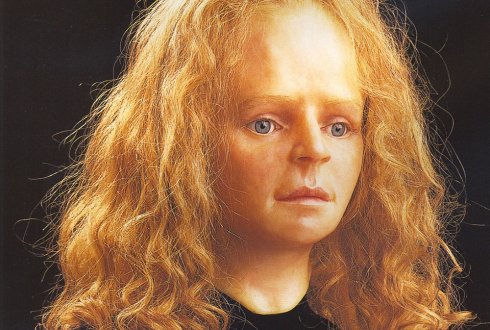 The Girl from Yde is the most iconic bog body of the Netherlands, also because of the facial reconstruction from 1994. Thanks to new research of Wageningen University & Research we now know in what kind of physical and cultural landscape she lived at the time. This offers a unique perspective on her life and death.

The Yde Girl was approximately 16 year old, when she was killed 2000 years ago and left in a bog just south of the present village of Yde in the province of Drenthe. In 1897 her body was found by two peat labourers. The specific anaerobic and acidic conditions of the bog made an optimal preservation possible. Even a reconstruction of her face was possible (Manchester University).

The finding showed a girl, dressed in a heavily worn woollen cloak with the right half of her long hair cut off. The girl was found with a woollen cord knotted around her neck, which raises the suspicion that she had been strangled. Most intricacies concerning her death, however, are unknown just as it is the case with many other bog bodies. “Two theories have been reported” says Dr Roy van Beek of the Soil Geography and Landscape Group, Wageningen University and leader of the research team. “The first of those states that it involves people who were not living according to the customary rules. Bog bodies were maybe people, who were convicted criminals or found guilty of adultery. The second, more widely spread explanation, is that it is about dedicating sacrifices to a higher power.”

Deposed off in shallow wetland

The research team, composed of scientists from various disciplines, made thorough analyses of the site location of the girl and mapped the wider, also archaeological, settings of landscape and soil. This kind of multidisciplinary study has been hitherto lacking. “We do know now, that the landscape was a mosaic of remnant forests on higher grounds and low-lying fens, of pastures and Celtic field systems," Roy van Beek states. “People settled on the ground morain ridges that would stay dry all year around. The girl may have originated from a nearby settlement on the Yde ridge. Her body was left in a small and relatively shallow bog at a distance of around one kilometre.”

Manslaughter on a small scale

The community at the settlement may have had an egalitarian structure. Population densities in the area are estimated to have been rather low, and the settlements small. This leads to the assumption that killing her was a relatively small scale affair, an idea also instigated by the remoteness of the bog itself. “Our approach attempts to give the complete picture, not just one piece of the puzzle. We will be getting much better insights into her life and into the reasoning behind her death. Many more bog bodies have been found in Europe, in the Netherlands the number goes up 48. We hope that our integrated research will be applied also elsewhere in peatlands, so that more can become known about the remarkable phenomenon of bog bodies.”

The body of Yde Girl is part of the collection at the Drenths Museum in Assen, the Netherlands.