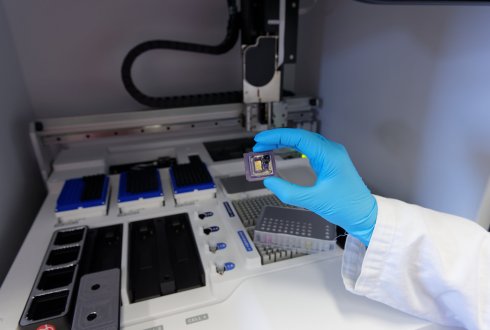 Next Generation Sequencing (NGS) is used to answer research questions related to meeting food demands in a sustainable way around the world. This was the thread running through the presentations during the Shared Research Facilities seminar held on 14 September.

Next Generation Sequencing techniques have brought a revolution to genetic research. They have opened up possibilities to address research questions which for scientists of the past would have been unimaginable. In the meantime NGS has become an essential tool in many research fields, e.g., de-novo genome sequencing, comparative genomics or gene expression and gene regulation studies.

Fungal genomics: How to sequence and explore the unculturable Synchytrium endobioticum

NGS was used to unravel the genomics of an un-culturable fungus, as Theo van der Lee explained how they tackled Synchytrium endobioticum. This microorganism is parasite on potato and an outbreak can result up to 100% crop loss, spores can be infections for over 40 years and it has an worldwide quarantine status.

As this fungus is not-culturable, only limited amounts of DNA could be isolated. Moreover, as this is contaminated with host and other environmental DNA, this appeared to be far from optimal as starting material. Nevertheless, using different NGS technologies (Illumina, 454 Roche and PacBio) it became finally feasible to construct the fungal genome. Using the ‘ZOO selection model’ genetic material was allocated to a specific species of origin, finally leaving fungal sequences for further analysis. The resulting assembly was annotated and combined with predicted proteins to select and validate the genes belonging to Synchytrium endobioticum. This provided novel insights into genetics, evolution, migration and pathogenesis of Synchytrium endobioticum.

A footprint of desiccation tolerance in the genome of Xerophyta viscosa

Xerophyta viscosa is a drought-tolerant plant found in subtropical arid regions. This plant and its seeds have the ability to survive after the removal of almost all cellular water without irreversible damage. An improved understanding of these plants will help with strategies for crop improvement to meet climate change and food security issues, as researcher Mariana Artur explained.

In her research plant physiology was combined with genomic and transcriptomic information to determine the main set of characteristics which make a plant desiccation tolerant or a resurrection plant, and others not.

With the NGS technologies PacBio and Illumina this genome was sequenced and assembled, and later combined with physiological as well as gene expression analysis. This genome sequence information and gene expression data provided insight into drought tolerance in resurrection species.

Quinoa is an ancient grain from South America. It is more nutritious than rice, wheat and potato, it contains no gluten, and has a very high salt tolerance. As it has become very fashionable, consumption is rising, thereby needing higher yielding and non-bitter varieties, exploring opportunities on saline soils and local adaption for widened distribution.

Robert van Loo explained the setup of the research, in which the NGS technologies PacBio, BioNano, Dovetail and illumina sequencing were used to sequence and reconstruct a reference genome. This was used for sequencing two populations with bitter and non-bitter tasting seeds. Only after linkage mapping using pseudo-anchor markers the genome fragments were constructed large enough and with high enough quality to find the mutations responsible for the non-bitter trait.

Elio Schijlen gave an overview of the different NGS technologies available at Wageningen University & Research and the latest developments therein. Though short read sequencing has been a proven technology widely used for many years, there is a clear shift towards long read sequencing, making de-novo genome and or transcriptome assemblies more efficient and reliable. The importance of high quality DNA and large molecules for long read technologies is crucial.