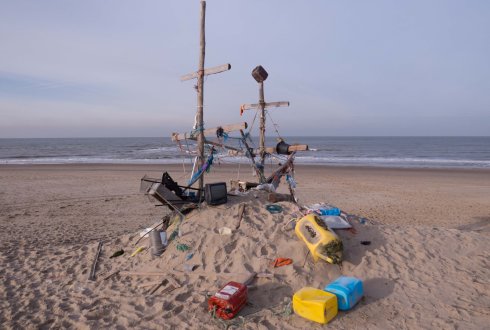 Plastic marine litter, both industrial granules and consumer wastes decline slowly but with certainty. For some years, this tendency was already present. Now, the addition of the data of monitoring year 2015 to the time series of plastic ingestion by Northern Fulmars has shown a statistically significant trend.

It is not possibly to pinpoint a single clear cause. But the public attention for the plastic soup and the garbage patches in the oceanic gyres seem to gradually take effect. Awareness has grown among all sectors, policy and general public. This is a small improvement in the quality of the North Sea environment, but we are not yet there!

93% of Northern fulmars has plastic in the stomach

Currently, still 93% of beached fulmars has plastic in the stomach, on average 23 particles with a mass of 0.29 gram of plastic per bird. About 53% of the birds had more than 0.1 gram of plastic in the stomach, whereas North Sea countries have agreed to a policy target in which no more than 10% of the fulmars may exceed that threshold. So, there is still a major job ahead, but we appear to be on the right track.

Photo: In recent years, on beaches of Texel, increasing numbers of tourists pick up marine debris from the beach and deposit it near the beach access points to be collected by the municipality. In part, these accumulations are used by creative people to build marine-litter-art, in this case a modern variation of the famous ghost ship ‘The Flying Dutchman’.

Full details are available from the report: