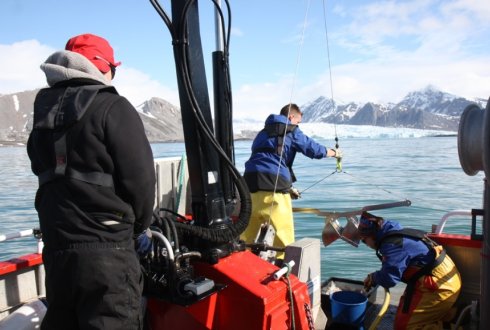 Organotin concentrations are low in sediment collected from harbours of Svalbard. This is the outcome of a pilot study by Wageningen UR and Akvaplan-niva, conducted in 2009-2013, that was recently published in Polar Biology.

Organotin compounds are used in antifouling paints of large seagoing vessels and are known to leach into the marine environment and accumulate in sediments and biota. These compounds are highly toxic to marine organisms such as marine snails and oysters. Even though the International Maritime Organisation (IMO) banned the use of organotin in antifouling paints in 2008, not all countries have ratified this ban. Therefore, it is expected that there are still some large sea-going vessels with a organotin coating sailing the global oceans. Organotin levels in Arctic harbour sediments have been reported for Greenland, Iceland and Alaska, but not for Svalbard/Spitsbergen.

In a pilot study, Wageningen UR and Akvaplan-niva collected and analysed sediment samples of all harbours in Spitsbergen (Ny-Ålesund, Longyearbyen, Svea, Pyramiden and Barentsburg) in 2009, 2012 and 2013. Organotin concentrations in sediments of Svalbard harbours turned out to be low (below the detection limit up to 14 ng Sn/g dw sum-butyltin) compared to other Arctic regions with a longer history of shipping. Organotin concentration in Svalbard sediment were below known no-observed-effect-concentrations. This was confirmed by an assessment of marine snails from Ny-Ålesund harbour that did not show any effects of organotin exposure.

Arctic sea routes are opening up for maritime transport due to sea ice retreat leading to increasing human activities in the Arctic and concomitant pressures on the environment. It is advised to continue monitoring contaminant levels in Svalbard, for which the current results form a good basis. If contaminant levels rise, mitigation measures can be taken to deal with the source of contamination.