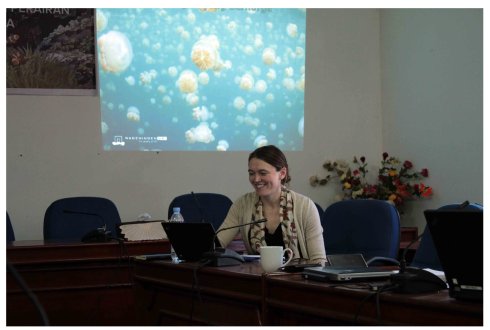 The Lakes of Gold Expedition has started! Part of the Marine Lakes Team is now at the University of Papua in Manokwari, Indonesia. Lisa Becking gave a presentation on marine lakes in the Bird’s Head Seascape, where she detailed the risks and gave recommendation for protection.

From 3 to 5 May there was an important administrative meeting for the marine and fisheries departments of the province and regency level in Manokwari. The participants included: the Ministry of Marine and Fisheries affairs, the heads of the MPAs, Universitas Papua (UNIPA), The Nature Conservancy Indonesia (TNC), Conservation International Indonesia (CI), and Starling Resources. The reason for the meeting was that currently there is a major administrative change going on. Previously, the responsibility and infrastructure of the MPAs was at the Regency, but from August 2017 onwards, it will lie with the Province (a level higher). In other words: there is a shift in power.

Counterparts of the Marine Lake Team at TNC, CI, UNIPA had asked them to give a presentation on marine lakes, with recommendations and code of conduct. As this is a time of transition, it is a good time to get marine lakes into conservation legislation.

The major points they wanted to get across about the lakes in Bird’s Head Seascape:

It seemed like everyone was keen to do this. Each person who was responsible asking for specific wording in order to make it possible. So we’re really hopeful!

(On a side note: this was the first time Lisa presented a full presentation in Indonesian!)