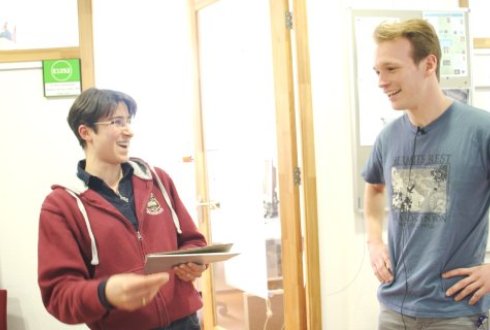 Resource surprised Maria Forlenza (CBI) with the good news when she was on her way from her room in Zodiac to an appointment. With this nomination for Teacher of the Year 2016, Maria can be awarded as the best teacher of 2016. The nomination was a surprise for her. ‘How nice! I had not expected it, because it took so long.’

Last year was the first time that Forlenza was nominated for the Teacher of the Year Award. Previously she was also on the longlist. ‘It is always an honour, I am really happy with it.’ She praises her group of students, who were really good this year. ‘I have had a really good training, so secretly I was kind of hoping for it.’

This prestigious award encourages lecturers at WU to improve the quality of the education. Their courses are among the highly ranked ones at the university. The teaching skills of the nominees are always outstanding and an example for many junior lecturers. The financial budget that goes along with the award should be used by the final winner for educational purposes.

The other nominees are André van Lammeren, Ute Sass-Klaassen, Roel Dijksma and Noëlle Aarts. The winner will be announced on April 21st during the presentation of the education bonuses. The Teacher of the Year Award is an initiative of the University Fund Wageningen.

Read the article in the Resource.

Watch the video that was made when Maria was surprised with the good news (in Dutch):