The vegetation-atmosphere carbon and water exchange at one particular site can strongly vary from year to year, and understanding this interannual variability in carbon and water exchange (IAVcw) is a critical factor in projecting future ecosystem changes. However, the mechanisms driving this IAVcw are not well understood. We used data on carbon and water fluxes from a multi-year eddy covariance study (1997-2009) in a Dutch Scots pine forest and forced a process-based ecosystem model (Lund-Potsdam-Jena General Ecosystem Simulator; LPJ-GUESS) with local data to, firstly, test whether the model can explain IAVcw and seasonal carbon and water exchange from direct environmental factors only. Initial model runs showed low correlations with estimated annual gross primary productivity (GPP) and annual actual evapotranspiration (AET), while monthly and daily fluxes showed high correlations. The model underestimated GPP and AET during winter and drought events. Secondly, we adapted the temperature inhibition function of photosynthesis to account for the observation that at this particular site, trees continue to assimilate at very low atmospheric temperatures (up to daily averages of -10°C), resulting in a net carbon sink in winter. While we were able to improve daily and monthly simulations during winter by lowering the modelled minimum temperature threshold for photosynthesis, this did not increase explained IAVcw at the site. Thirdly, we implemented three alternative hypotheses concerning water uptake by plants in order to test which one best corresponds with the data. In particular, we analyse the effects during the 2003 heatwave. These simulations revealed a strong sensitivity of the modelled fluxes during dry and warm conditions, but no single formulation was consistently superior in reproducing the data for all timescales and the overall model-data match for IAVcw could not be improved. Most probably access to deep soil water leads to higher AET and GPP simulated during the heatwave of 2003. We conclude that photosynthesis at lower temperatures than assumed in most models can be important for winter carbon and water fluxes in pine forests. Furthermore, details of the model representations of water uptake, which are often overlooked, need further attention, and deep water access should be treated explicitly. 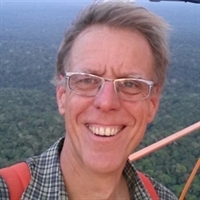