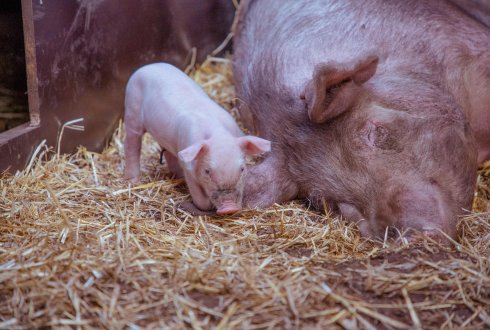 Pigs walk on sand, they can go to a toilet, search and root for food that drops from above and live under preferred soft light. This sounds like Valhalla for the pig and that was exactly the starting point of the initiators of Family Pigsty. Research by Wageningen University & Research (WUR) forms the basis of this new concept for a stable of the future in Venhorst.

The natural needs of the pig are central. In the coming months, researchers will regularly check and measure whether the theory matches practice. ‘That’s unique about this project,’ says Associate Professor Liesbeth Bolhuis of WUR, ‘Here we can still adapt the system to the animal instead of the animal having to adapt to the system’.

For example, there is a pig toilet in the new stable. This month, tests are starting with separating the faeces from urine. When nitrogen from the urine mixes with faeces, ammonia is formed which causes a foul odour and creates stress for the pigs. Separating these waste products reduces nitrogen emission to zero.

Under the roof, there is a special construction that drops food down into the sand a few times a day. This allows the pigs to root together for their food as they do in their natural habitat. The sand also offers the possibility to dig a pit or take a mud bath.

Before the birth of piglets, the sows can make their own nest, while staying in touch with their group mates. Soon after birth, the piglets can root with their mothers and become acquainted with other pigs, so that they gradually become independent. They stay in the same sty all their lives.

By meeting their behavioural needs and avoiding abrupt relocations, the pigs are expected to be less susceptible to disease and thus require no antibiotics.

It is an exciting time, not only for the initiators but also for the researchers to see how the pigs will react to the new system. ‘We do not know what the rhythm of the animals and their social interactions will be’, says researcher Inonge Reimert. ‘Can we indeed avoid aggression because animals can eat at the same time? At what times should the food rain? All aspects that we will study’.

The researchers do this not only by observing the animals in the Family Pigsty. Some pigs have trackers that record their movements. That data is fed into the computer to map the pigs’ movements and locations through time.

The Family Pigsty is made possible by the European Fund for Regional Development, the Ministry of Economic Affairs and Climate and the province of Noord-Brabant in the context of OPZuid.