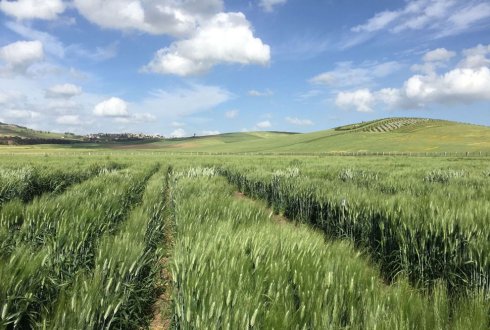 Experts in plant pathology from Wageningen University & Research have published new research results that are so remarkable and unexpected that they will require changes to be made to teaching material and computer models related to plant pathology. The scientists have found proof that ‘weak’ types of plant fungi which cannot cause disease in resistant plants do have sex, allowing maintenance of their genes in populations. This means that the ‘strong’ types which can kill resistant plants not rapidly dominate. This extend the longevity of resistant varieties.

The scientists made their discovery while studying septoria leaf blotch, the most harmful wheat disease in Europe and North Africa. Plant breeders develop wheat varieties that are resistant to the disease. Scientists previously thought that the fungus that causes the disease (Zymoseptoria tritici) would quickly be able to circumvent this resistance as only the ‘extra strong’ virulent fungus types could reproduce on resistant plants. But this is not the case. Fungus types that cannot infect resistant plants circumvent the problem by having sex.

Gert Kema, professor in tropical phytopathology at Wageningen University & Research who studies the fungus already for over 20 years and leader of the team, is enthusiastic about the positive impact of the new insights: “The sexual reproduction of the fungal types which cannot infect the resistant plants is a mechanism of the fungus Zymoseptoria to retain their genes in fungal populations for a long time. This slows down epidemics and extends the longevity of resistant wheat varieties. This is good news. No sudden breakdown of resistance, but a gradual decrease. We have no found the mechanisms explain what we see in practice”.

The common line of thought was that fungal spores which end up on a resistant plant can only produce offspring if the plant is affected, thereby allowing the fungus to reproduce. This would result in an extremely fast selection of virulent fungal strains that can circumvent the resistance of wheat plants and cause major epidemics. This also occurs in other fungal diseases, such as rusts on wheat and is called “boom and bust” cycles.

In the case of the septoria disease in wheat, however, it was found that the fraction of virulent fungal lines increases slower than expected. This is good news as it means that the resistant wheat varieties last longer and have significantly extended value for food security. The slow decline of resistances against the septoria fungus has been an enigma to plant pathogen experts for over 15 years.

The Wageningen scientists found that neither the ability to infect plants nor chemical fungicides can stop sex of the fungus. They collaborated with theoretical epidemiologists and computer model experts at Rothamsted Research to translate these biological discoveries into models predicting the rate of an epidemic. Although the scientist have never seen sex in the fungus, the genetic analyses proof the mechanism: the ‘weak’ spores which cannot infect the plant (the so-called avirulent spores) are in fact able to produce male gametes (fungal sperm) and can therefore reproduce.

Thus the female reproductive cells of virulent individuals are exclusively fertilised by male reproductive cells of avirulent fungal strains. This makes part of the offspring – the spores – avirulent too. Although these avirulent spores are, in turn, unable to infect resistant wheat plants, they are able to produce male sperm and partake in sex. As a result, the genes that establish avirulence remain in the fungal population for a long time and significantly extend the value of resistant wheat varieties for food security.

The mathematical model based on this observation describes this long-term resistance in agricultural systems, and also explains observations in natural ecosystems which had previously remained inexplicable. With fungicides something similar happens and results in a rapid generation and dissemination of strains that are incurable by the fungicides.

As Z. tritici is a model for a large group of fungal plant pathogens, the discovered principles likely apply to many other plant diseases.

Read the article in Nature Genetics