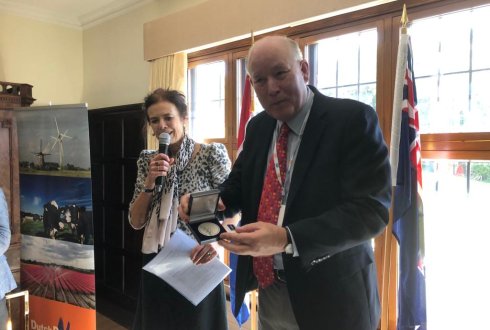 Professor Paul Moughan (Riddet Institute, Massey University, New Zealand) received the prestigious Silver Medal of Honour, the highest possible award for those who have rendered great services to Wageningen University & Research (WUR). The distinction was presented by Prof. Dr. Louise O. Fresco, the President of the Executive Board of WUR. She is visiting New Zealand this week.

Throughout his impressive career, Paul Moughan has been a great advocate of Wageningen University & Research. His association with WUR started in 1985 when he first came to the Netherlands for a sabbatical period to work in the area of animal nutrition and growth modelling.

Since that time, he has been visiting Wageningen every year, sometimes twice a year to contribute to the international courses in growth modelling of animals and feed evaluation science. The latter course is still offered by Wageningen Academy every two years and attracts over 25 scientist from various countries in the world, largely due to the esteem of Prof Moughan.

As a result of these courses, three books have been published by Wageningen Academic publishers with joint co-authorship between Massey and Wageningen University.

Prof. Moughan has set up a number of joint research programmes especially on Anti Nutritional Factors (ANFs) in animal feeds with WUR. The Proteos project on protein evaluation of human foods is the latest joint programme where Prof Moughan has actively involved Animal Nutrition and Human Nutrition groups. This project is part of the first Memorandum of Understanding signed between Massey and Wageningen University in 2013 and has largely been established as a result of the efforts of Prof Moughan. The Proteos project aims to develop an international database of the protein quality of human foods.