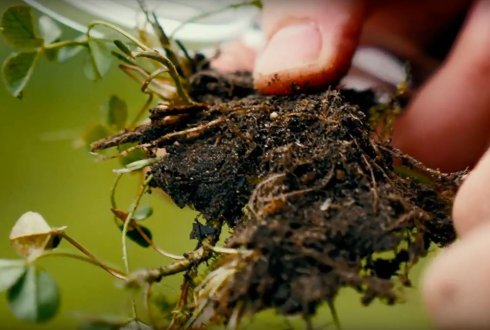 Healthy soil life can contribute to sustainable agriculture which, in addition to ensuring a good yield, keeps diseases under control and generates carbon and nitrogen retention. That is what Prof. Gerlinde De Deyn, Professor holding a personal chair in Soil Ecology, asserted in her inaugural address at Wageningen University & Research on 18 May.

Life underground is richer in species than aboveground. The activity of interacting soil organisms, such as fungi and bacteria promotes fertile soil that as a habitat is characterised by sufficient water, space, air, and nutrients.

The origin of healthy soil

It takes several centuries for the transformation of bare rock into fertile soil through the colonisation of bare rock by lichens and the subsequent development of grassland and forests. During that development, organisms in the soil ensure that dead organic material is incorporate into the soil and can serve as a ‘bank account’ for soil nutrients and thereby  fertile ground. “Thousands of species of bacteria, fungi, and other organisms are part of this process. It is precisely because the creation of fertile soil takes so long that we have to protect it from loss and degradation for example due to erosion, compaction, salinisation and pollution. It is no wonder that typically  naturally rich soil was used for agriculture in the past. Especially now with growing populations and environmental pressures we have to be very aware that losing fertile soil occurs much more quickly than creating it. We thus have to be considerate and feed the earth to produce our food sustainably also for future generations,” recommends Prof. De Deyn in her inaugural address Multifunctionality of soil biodiversity.

In the present-day[DGd1] , humanity controls soil conditions to a substantial degree due to the intensity with which agricultural systems are managed. "Fast-growing, high-yielding crops, mineral fertilizers, heavy soil disturbance such as through ploughing, and the use of pesticides all have significant drawbacks: The system has low species diversity, there is a high risk of nutrient loss through leaching and volatilisation, and the emission of greenhouse gases as well as the use of pesticides can also have undesired side effects,” says Prof. De Deyn.

When an agricultural system receives less input, such as artificial fertiliser, it is richer in plant and soil life. The soil processes have to maintain the soil fertility. “From above ground, this soil appears to be less productive,” explains Prof. De Deyn. However, biodiversity and productivity are linked. "In experiments with grassland, our work and that of colleagues has  shown that the richer the biodiversity (number of plant species) is, the higher the yield for the total grassland. Furthermore, it should be noted that certain species combinations lead to particularly high yields. Each species provides a specific contribution that it cannot provide in isolation such as protecting against a disease or improving the uptake of nutrients and water,” says Prof. De Deyn.

"We must realise that plant growth changes the soil by, for example, the addition of organic matter in the form of root debris and dead plant remains that are left behind in the soil after the harvest. Life in the soil responds to this – and subsequently give a feedback to the following plants, as it were, in a subsequent generation. This mechanism causes the following plants to grow particularly well or poorly. My research into this phenomenon should lead to the prediction of such feedback effects. This should soon indicate what kind of combinations yield more than monocultures during their own growth as well as through their afterlife effects," says Prof. De Deyn.

"The first results in the field are promising. We found combinations of species of green manures that caused the next crops to grow better than what you would expect based on their monoculture. Using drones and special cameras, we can observe these legacy effects of plants in the soil on the next crop from the air, in high resolution across a large space and over time. This provides attractive future perspectives for better understanding and utilising ecological principles in the field of plant-soil interactions.”