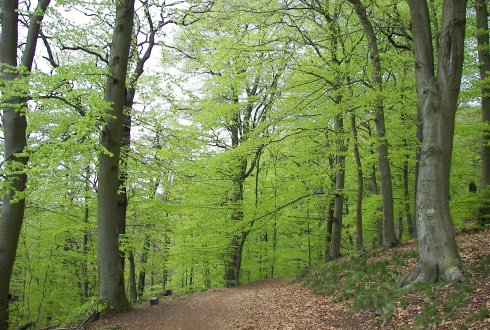 Severe droughts strongly impact photosynthesis (GPP), and satellite imagery has yet to demonstrate its ability to detect drought effects. Especially changes in vegetation functioning when vegetation state remains unaltered (no browning or defoliation) pose a challenge to satellite-derived indicators. We evaluated the performance of different satellite indicators to detect strong drought effects on GPP in a beech forest in France (Hesse), where vegetation state remained largely unaffected while GPP decreased substantially. We compared the results with three additional sites: a Mediterranean holm oak forest (Puéchabon), a temperate beech forest (Hainich), and a semi-arid grassland (Bugacpuszta). In Hesse, a three-year reduction in GPP following drought was detected only by the Enhanced Vegetation Index (EVI). The Photochemical Reflectance Index (PRI) also detected this drought effect, but only after normalization for absorbed light. In Puéchabon normalized PRI outperformed the other indicators, while the short-term drought effect in Hainich was not detected by any tested indicator. In contrast, most indicators, but not PRI, captured the drought effects in Bugacpuszta. Hence, PRI improved detection of drought effects on GPP in forests and we propose that PRI normalized for absorbed light is considered in future algorithms to estimate GPP from space.