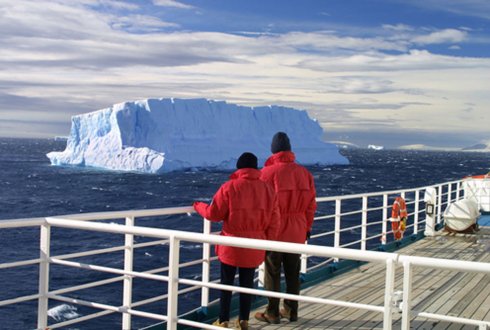 For her PhD research at the Environmental Policy Group, Linde van Bets analysed how maritime activities have adapted to a changing environment. ‘It specifically addresses marine communities, transnational communities of users and policy makers who are involved in maritime activities such as cruise tourism and oil and gas exploration.’ A short interview about her research.

Research in the Arctic and the Caribbean. These are two polar opposites.

‘That’s right. I decided on these two distinct regions as part of a larger research programme at Wageningen University & Research. This choice was predominantly based on the fact that both regions have a transnational network of communities that are neither local nor restricted to a particular location. That's what my research is about.’

What exactly does your research address?

‘Climate change in the Arctic has made oil and gas reserves more accessible and has created new marine communities such as those around the offshore gas exploration in the Barents Sea. This is Norwegian territory and the state-owned company Statoil profits from these exploration activities. The company has built a large subsea floating production installation 160 km off the coast. This is the first offshore gas project of this scope: a national prestige project with international attention. The Norwegian government wants to turn Hammerfest into a new international centre for oil and gas. This means that the local community in Hammerfest will need to adapt to a rapidly changing Arctic climate as well as new socio-economic developments.’

Do the local inhabitants of Hammerfest even want this?

‘Hammerfest is isolated in the northern part of Norway, a region that is heavily dependent on fishing. The local fishing community is now being transformed into an international oil and gas production marine community. This is a significant transformation with a large pipeline now running through local fishing grounds. The collaboration between the Norwegian government and Statoil, who are both users and policy makers in this community, tries to take into account the environment and the local users, but only to a certain extent, as it needs to remain economically viable.’

You also visited Svalbard. What did you do there?

‘My research in Svalbard focused on expedition cruise tourism which involves relatively small-scale nature expeditions for a specific public. These cruises are not as large scale as those in the Caribbean.’

What is the relationship between nature and commercial activities?

‘The relationship between nature and tourism is tense, but the organisations want to work together in a responsible manner in the marine community. In 2003, the tour operators organised themselves in AECO, the Association of Arctic Expedition Cruise Operators and developed self-regulatory guidelines in relation to Svalbard’s pristine environmental and cultural heritage. Svalbard falls under Norwegian legislation but AECO wants to prevent Norway from imposing even more restrictive laws. Their proactive policy has seen successful as the development of site-specific guidelines is being adopted in national legislation and management plans for national parks in Svalbard.’

How do you explain this success?

So, information plays a vital role?

‘Certainly. Information enhances science. These days everybody has access to information and information is no longer the sole domain of governments or natural scientists. However, the question remains which information is reliable and where the responsibilities lie. After all, information is power and has an impact on social relations. This is strengthened by the fact that there are different stakeholders and parties that no longer have to be in specific locations to be involved in governance due to the network structure. It is no longer about country-specific legislation, but rather about the transnational context of the marine community.’

Are you heading off to the tropical Caribbean again?

‘Well, I first need to finish my thesis and then I'll see what I'm going to do. In any case, my research has taken me to many different unique locations where I was able to learn a great deal.’