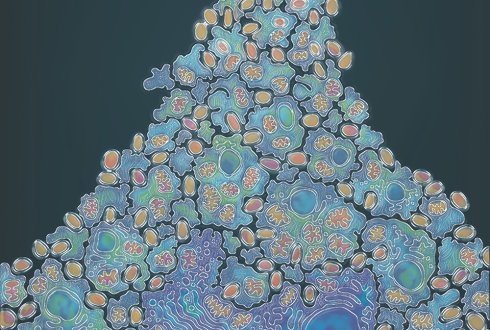 How did complex life on Earth emerge about two billion years ago? An international team of researchers from Sweden, United States, Australia and The Netherlands, now provides new insights. In a study, published in Nature Microbiology this week, the team presents a new model about the first complex cell types that comprise plants, fungi, but also animals and humans. They describe how complex cellular lifeforms evolved via the metabolic integration of simpler cell types.

Life on Earth comprises three major groups. Two of these groups are represented by microbial life forms, Bacteria and Archaea - collectively known as prokaryotes. Cells from these prokaryotes are generally small and simple. The third group of organisms comprises all visible life - such as humans, animals, and fungi - and are known as eukaryotes. In contrast to cells from prokaryotes, eukaryotic cells are generally much larger and more complex. The origin of the eukaryotic cell represents one of the most fundamental puzzles in the evolution of life on Earth. Now, an international collective of researchers, led by Thijs Ettema from Wageningen University & Research and Uppsala University, has shed new light into the evolutionary transition from simple prokaryotic to the more complex eukaryotic cell types.

Previous studies have indicated that the eukaryotic cell is the result from a merger of an archaeal and a bacterial cell, in which the bacterium was eventually taken up by the archaeal cell. It is generally agreed upon that both cells were driven together by a mutually beneficial interaction, known as symbiosis. The most plausible hypotheses for the origin of eukaryotes involve a symbiosis in which metabolites produced by one partner are used by the other. The exact nature of this metabolic symbiosis, however, has been fiercely debated by scientists over the past decades.

Recent work from the laboratory of Thijs Ettema had already provided important details about the identity of the archaeal host cell in this scenario. Based on genomic studies, his lab identified a new group of Archaea, the Asgard archaea, which they showed, represented the closest prokaryotic relatives of eukaryotes. “Our previous analyses mostly focused on the identification of eukaryotic features in genomes of these Asgard archaea, and not on their metabolic properties,” says Thijs Ettema. “But now we wanted to see if these genomes could also tell us something about their metabolism. This could shed new light on the proposed metabolic symbiosis underpinning the origin of eukaryotes”.

The research team set out to analyse the metabolic repertoire encoded by the available Asgard archaea genomes. “A surprising feature of the Asgard archaea is their ability to use complex carbohydrates as growth substrates,” says Anja Spang, scientist at Uppsala University and NIOZ and lead author of the study. “Furthermore, almost all members of these archaea encode various enzymes predicted to be involved in the degradation of hydrocarbons and fatty acids of different chain lengths”.

Accepting electrons from a host cell

The results of the study indicate that the archaeal ancestor of eukaryotes may have used various organic substrates for growth. Eukaryotes, including humans, also metabolize organic substrates, but they do this more efficiently by using so-called terminal electron acceptors. These acceptors take up the electrons that are produced during growth on organic substrates. Yet, our study points out that the archaeal ancestor of eukaryotes most likely lacked these terminal electron acceptors. This raises the question, where did the electrons go? “To sustain growth, we propose that the archaeal host cell lived in close association with a bacterial partner organism that accepted electrons from the archaeon”, suggests Anja Spang. “Previous models have also suggested a transfer of electrons between the archaeal host and the bacterial symbiont, but based on our analyses, we propose a model in which the flow of electrons is reversed. Such a reversed flow of electrons between archaeal and bacterial symbionts are commonly observed in nature”.

Ultimately, Ettema and his team would like to experimentally verify the new hypothesis, which is purely based on genomic analyses. This would however require growing Asgard archaea in the laboratory, something that has not yet been established. “We are making progress on this effort, but we are not there yet. In the meantime, we will focus on analysing new Asgard archaea genomes, which will greatly help to further refine our initial inferences”, says Thijs Ettema. “I am convinced that the coming years will bring us even closer to understanding one of the most fascinating and debated events in the evolution of complex cells: the origin of eukaryotes”.