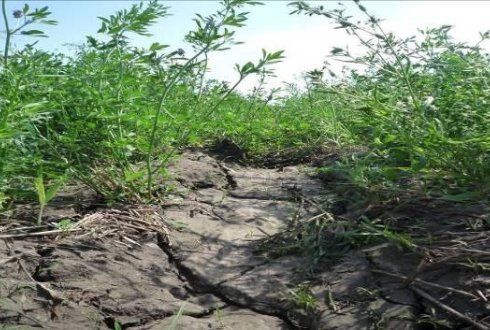 The collapse of the Soviet Union in 1991 has been a turning point in the World history that left a unique footprint on the Northern Eurasian ecosystems. Conducting large scale mapping of environmental change and separating between naturogenic and anthropogenic drivers is a difficult endeavor in such highly complex systems. In this research a piece-wise linear regression method was used for breakpoint detection in Rain-Use Efficiency (RUE) time series and a classification of ecosystem response types was produced. Supported by earth observation data, field data and expert knowledge, this study provides empirical evidence regarding the occurrence of drastic changes in RUE (assessment of the timing, the direction and the significance of these changes) in Northern Eurasian ecosystems between 1982 and 2011. About 36% of the study area (3.4 million km2) showed significant (p<0.05) trends and/or turning points in RUE during the observation period. A large proportion of detected turning points in RUE occurred around the fall of the Soviet Union in 1991 and in the following years which were attributed to widespread agricultural land abandonment. Our study also showed that recurrent droughts deeply affected vegetation productivity throughout the observation period, with a general worsening of the drought conditions in recent years. Moreover, recent human-induced turning points in ecosystem functioning were detected and attributed to ongoing recultivation and change in irrigation practices in the Volgograd region, and to increased salinization and increased grazing intensity around Lake Balkhash. The ecosystem-state assessment method introduced here proved to be a valuable support that highlighted hotspots of potentially altered ecosystems and allowed for disentangling human from climatic disturbances.