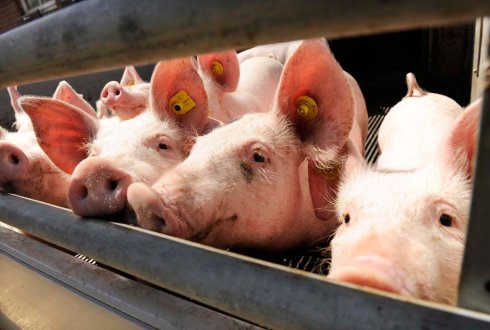 The Secretary of Economic Affairs  (EZ) is challenging entrepreneurs to develop new feed- and management measures for livestock farms to decrease the emission of ammonia with at least 10%. Stage I of this SBIR project is currently ongoing, of which two pilots are conducted in the stables for fattening pigs at SIC Sterksel. The final report of this stage has to be completed by the end of May. A proposal for a follow-up of the study can be presented, only when the results are promising. The best projects will gain financial support to start a follow-up by the end of 2014.

Moreover, due to the huge water absorbing capacity of beet pulp, it is not possible to use beet pulp in large amounts as an ingredient for liquid feeding. Duynie Holding has developed a fluid form of beet pulp that is under research at SIC Sterksel. In the study the effect of fluid beet pulp is measured on ammonia emission, feed intake, technical performance, slaughter quality and outflow of the liquid feed in the troughs.

Heat stress in pigs causes abnormal lying and defecating behaviour. In such a situation – which is pretty common in stables (heavy animals and/ or warm days) – fattening pigs will cool down on the slatted floor and start to defecate on the solid floor. The solid floor becomes dirty by manure and urine, with an increased ammonia emission as a result.

JOVAS has developed a system that is able to steer the behaviour of the pigs, even at high temperatures, using devices that spray water and give strong air pulses. Heat stress and ammonia emission from the solid floor are consequently reduced.

JOVAS has conducted initial study on a common pig farm in the Netherlands. The initial study showed an effect of the devices on lying and defecating behaviour. In a following study at SIC Sterksel the devices for spraying water and high speed air pulses will be quantified in a conditional pig room. Since the devices are most effective under heat stress conditions the temperature will be increased (mimicking summer) at pen level.

Results of this pilots will be published in June 2014.