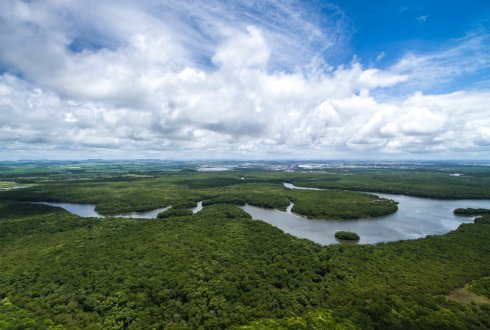 Forest trees can die back due to a lack of rain. This results in reduced evaporation from within the forest, which in turn leads to less rainfall. ‘Self-amplified’ effects like this can have a domino effect, causing drought and dieback in more and more sections of the forest. Today’s edition of Nature Communications features an article by Arie Staal from Wageningen University reporting the results of a study he conducted with colleagues into these destabilising effects in the Amazon. The study was headed by Delphine Clara Zemp from the Potsdam Institute for Climate Impact Research (PIK) in Germany.

“The question of whether climate change, deforestation and forest fires are having a permanent destabilising effect on the rain forests in the Amazon is currently under serious scientific and social scrutiny,” says Arie Staal, PhD candidate at the Aquatic Ecology and Water Quality Management group. “We already know that climate and forests interact with each other, but we don’t know exactly how the mechanisms behind this work. Together with an international group of researchers, we examined the incidence of self-amplified forest loss resulting from increasing drought.”

The researchers used wind, rain and evaporation patterns to simulate the evaporation and rainfall situations in the Amazon. This way, they were able to calculate the effect of drought in one area on possible forest dieback in another area. Arie Staal: “If less moisture is transported from the ocean to the Amazon in the dry season, which areas of the forest will come under serious threat?” The researchers then studied whether an event of this kind would have a permanent effect on the system as a whole, and cause self-amplified forest loss. The research revealed that self-amplified forest loss increases disproportionately in response to reduced rainfall during the dry season. If a section of forest disappears because of drought, other forests may also die back in a kind of domino effect, even if the rainfall in that part of the forest does not drop significantly. Arie Staal: “We may lose a a lot of forest in the Amazon by the end of the 21st century. By that time, the climate models are projecting a reduction in moisture transported from the ocean of up to 40% in the driest months of the year. Self-amplified effects alone could cause forest loss to rise to up to 14% of the total area.”

Certain climatic conditions can ‘upset the balance’ in tropical forests, changing them into savanna. This is an irreversible tipping point, which creates a new stable balance as it were. So if the drop in rainfall crosses a particular line, system feedback can cause disproportionate forest loss. This does not only apply to drought, but also to forest fires, for example.

Although extreme drought and forest fires have the potential to destabilise the Amazon system, in the response to drought, diversity has a stabilising effect. The greater the diversity, the lower the self-amplified forest loss. Arie Staal: “This indicates that the rich biodiversity found in the Amazon may be able to protect the forest from self-amplified forest loss. If you want to fully understand the resilience and stabilising capacity of the Amazon, you must first understand the mechanisms that cause self-amplified processes. This research is a step in that direction.”