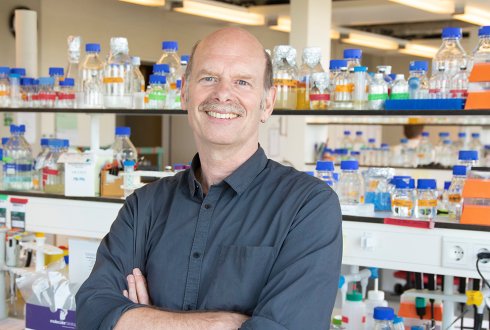 Today, the Wageningen Microbiology Professor John van der Oost will receive the Spinoza Prize presented by Science Minister Ingrid van Engelshoven. John van der Oost and his group will spend the amount of 2.5 million euros - the largest prize in science in the Netherlands - to fund new research paths to unravel the earlier discovered CRISPR immune system and other systems in bacteria.

John van der Oost is incredibly pleased at receiving the Spinoza Prize. “The prize is a special honour for me and for the entire Microbiology research team, because the people in the laboratories, the staff members and the doctoral students do the real work.”

The Microbiology professor at Wageningen University & Research is one of the pioneers in the ground-breaking CRISPR-Cas technique. Using it, scientists are able to remove, add or alter specific genes with accuracy. Van der Oost discovered how the CRISPR-Cas system contributes to bacterial resistance to viruses. Experts describe CRISPR-Cas as one of the greatest revolutions in life sciences.

Taking up bacterial arms against viruses

John van der Oost and his team were one of the few groups in the world to research the CRISPR system right from the start. He and fellow researchers published research on the way in which bacteria arm themselves against aggressive viruses in Science in 2008. The bacteria store up short fragments of the virus DNA as copies in their own DNA strand. These snippets are called clustered regularly interspaced short palindromic repeats - or CRISPRs. The group showed how the bacterium uses the information to ward off new virus attacks. John van der Oost also showed through the design of the CRISPR that this bacterial technique can be used as a new tool for ‘genome surgery’. The prize money will make it possible to extend the CRISPR-Cas research lines. “We will now be able to attract more high-quality researchers to further probe the defence secrets of bacteria.”

John van der Oost was in the lab a few weeks ago when he received a phone call from the NWO chair. “He wanted to talk to me. Stan Gielen said that the Spinoza Committee had decided to award the Spinoza Prize to me. Naturally I was overjoyed.”

The Spinoza Prize award ceremony will be held in the Koninklijke Schouwburg in The Hague on 12 September. During the award ceremony, John van der Oost will talk about his research and how he intends to use the prize to further it.