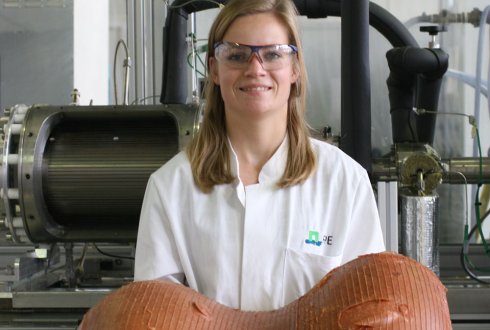 A meat replacer, based on legumes, which is not inferior to steak. That is the promising future and interim result of an extensive research about sustainable meat replacers, purely based on vegetable ingredients. Professor Atze Jan van der Goot, from Wageningen University, will be presenting his findings on Sunday November the 1st.

The food technologist Van der Goot and his group developed a new technology that is fabricating the ingredients from legumes, like soy beans, in such a way that a ‘meat structure’ develops with the fineness and fibre structure from a steak. This concept is the basis for the development of a vegetarian steak. The product makes animal ingredients, such as egg or whey, unnecessary and does not have any limitations size-wise.

The researchers from Wageningen, together with colleagues from TU Delft, were building a working prototype for the production of vegetable pieces of meat. With the device, one can mimic meat-like structures from soy proteins, in a piece of a few kilograms (60x30x3 cm); which is too large to fit on two plates. The structure is finer as so far reached by the currently available method (extrusion). Besides, the method is much more energy efficient compared to existing production methods of meat replacers.

With the developed method, the so called Shear Cell Technology, it is possible to deform vegetable proteins that results in the desirable fibre structure. Herewith, a new phase has begun for the development of meat alternatives. Initially, this method has been used to make fibres out of dairy proteins. But to be genuinely sustainable, one should focus on vegetable proteins, according to Van der Groot. ‘One needs to take into account the whole production process and criticize all ingredients based on their sustainability. Then, it turns out that way less energy gets lost when producing with vegetable proteins.’

Van der Goot is unable to tell how much time it takes before the new, sustainable meat replacer to reach the market. ‘First, our prototype needs to be developed further up to a full productionfacility.’

The research was achieved by the ISPT (Institute for Sustainable Process Technology) facilitated public-private collaboration between Wageningen UR, TU Delft, the Vegetarian Vegetarische Butcher and The Peas Foundation. Because the Vegetarian Butcher is an important player in this research, the first concrete research results will be presented November the 1st at the Open Day of the company at its newly established product location of meat replacers in Breda. Van der Goot and his team will give an explanation about the break-through in the field of pure vegetable based ‘steak’.

Attendance is possible after subscription femke.aardema@devegetarischeslager.nl