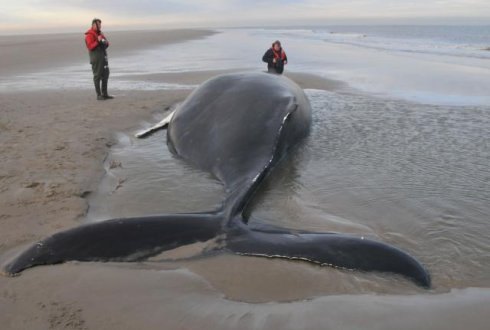 In the humpback whale that stranded end of 2012 and was publically called Johanna, microplastics were found. It is the first time that microplastics were encountered in the intestinal tract of a baleen whale. Sixteen pieces of plastic were found by Ellen Besseling and colleagues from the department of Aquatic ecology and water quality management and research institute IMARES. De researchers cannot exclude that the whale had ingested more plastic, as part could be excreted during the days that Johanna laid stranded on the mudflat. Additionally, not the full intestinal tract was obtained for analysis.

It seems unlikely that the humpback whale suffered from the ingested plastic. For smaller species it is more plausible that blockage of the intestines occurs, which is indeed observed regularly in birds. Microplastics are plastic pieces smaller than 5 millimetre and are formed by the degradation of bigger plastic waste or emitted from for example personal care products into the marine environment.

The gut content of whales can, according to Besseling, give an estimate of the plastic contamination at sea: “It shows that even far away from the inhabited world animals can ingest plastic”. Particularly because stranded whales cannot be studied very often, it is important to make also the knowledge about only one individual animal public.

In December 2012 the humpback whale Johanna stranded on a mudflat near the island of Texel. After it died, the contents of its intestines were sieved and sorted in the laboratory. Subsequently, for every suspected piece of plastic it was determined whether it was indeed plastic.

The findings were recently published in the scientific journal Marine Pollution Bulletin: