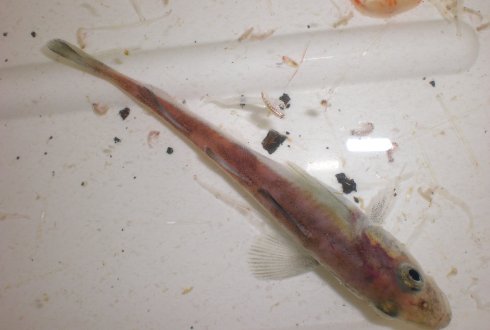 Polar cod fulfil a key role in the Arctic food web, as they are a major source of food for seals, whales and seabirds alike. Under the ice of the central Arctic, the juvenile fish are indirectly but heavily dependent on ice algae. As a result, retreating sea ice could have far-reaching impacts on the food web. Though researchers have long since suspected this relation existed, it has now been successfully confirmed by collaborating researchers of the Alfred Wegener Institute (AWI) in Germany and Wageningen Marine Research.

Arctic sea ice offers a veritable nursery ground for polar cod: young fish between one and two years old live in cracks and crevices under the ice. They drift along with the ice, which is most likely how they make their way from their spawning grounds in the waters of northern Siberia to the central Arctic.

During their journey, the young polar cod feed on crustaceans, which in turn feed on ice algae. As such, there is a direct relation between the polar cod and the ice algae, which could ultimately threaten the young polar cod’s survival. This was the key outcome of a study recently published in the journal “Progress in Oceanography”. “Generally speaking, our findings indicate that polar cod are heavily dependent on ice algae,” says first author and AWI biologist Doreen Kohlbach. “That means the rapid retreat of Arctic sea ice poses an especially serious threat for polar cod. When the ice retreats, it takes with it the basis of their diet. Given the polar cod’s pivotal role, this could also produce changes throughout the entire food web.”

The polar cod were caught directly underneath the sea ice of the central Arctic Ocean using the Surface and Under Ice Trawl (SUIT). The fish’s stomach contents showed the researchers what they had recently eaten. What they found: the amphipod crustacean Apherusa glacialis is at the top of the young polar cod’s menu. In turn, the crustacean primarily feeds on diatoms that grow directly on or under the sea ice.

In a second step, the researchers confirmed the presence of carbon from the ice algae in the fish. To do so, they analysed the fatty-acid patterns and the composition of stable isotopes in the polar cod’s muscle and other tissues. In the food web, certain fatty acids are passed on unchanged from the algae to the animals that feed on them. “When we find the fatty acids from the ice algae in the meat or tissues of a fish, it tells us the fish or its prey must have fed on the algae,” says Kohlbach. A subsequent isotope analysis makes it possible to determine the precise percentage of ice-algae carbon in the fish’s diet. “The analysis shows that diatoms make up the most important source of carbon for polar cod,” explains Kohlbach. In fact, the outcomes indicate that between 50 and 90 per cent of the young polar cod’s carbon stems from ice algae. “Even though we had assumed there was a connection between the ice algae and polar cod from the outset of the study, these high values surprised us.”

A new Arctic expedition with the German icebreaker Polarstern  is planned for July this year. This will give the researchers of Wageningen Marine Research and their partners from AWI the opportunity to continue the research on polar cod. Aims are to investigate the distribution of polar cod and its food, and relate the distribution of both to the properties of sea ice. Comparing results from different years and in different circumstances will help to gain knowledge on the relation between sea ice and a variety of species, which in turn will help to make predictions about fate of the Arctic ecosystem when the sea ice disappears.

During the coming expedition, researchers Bram Feij of the Royal Netherlands Institute for Sea Research (NIOZ) and Susanne Kühn (Wageningen Marine Research) will investigate the bird and mammal distribution in the Arctic Ocean. Information on this is scarce and will help to understand the relation of birds and mammals with the sea ice ecosystem and the distribution of polar cod, their important source of food.

But before all this can happen, a lot of preparations need to be done. This has already kept people busy in the last few months. “We need to make sure we check and pack everything we need so we can send it to Bremerhaven where it will be loaded on the ship”, says Kühn. “Moreover, we need to prep for the work we are going to do, for instance by reading up on the species we might encounter during the expedition”. The Dutch part of the team that will join the expedition furthermore consists of André Meijboom, Michiel van Dorssen, Elisa Bravo Rebolledo and Fokje Schaafsma.

This text was adapted from the AWI press release at: https://www.awi.de/nc/en/about-us/service/press/press-release/wo-das-meereis-schmilzt-finden-junge-polardorsche-kein-futter-mehr.html.

Photo above: Polar cod (Boreogauds saida) was caught from underneath the sea ice using the SUIT. There are also amphipods visible on the picture, which are on the polar cod’s menu.