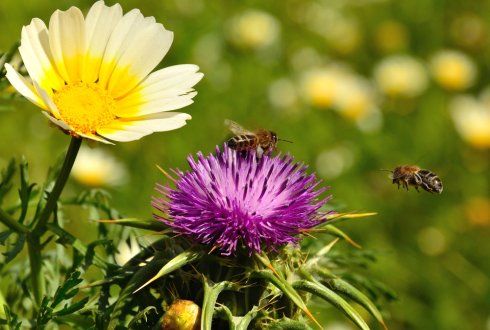 The European Parliament unanimously accepted a proposal to speed up market registration of products for biological control of pests, that have a low environmental impact. Almost at the same time, the Human Rights Committee of the United Nations issued a statement, saying that it is very well possible to feed a world population of nine billion people without the use of harmful chemical crop protection agents.

The article lists several hundreds of organisms such as parasitoids, predators or micro-organisms, plus the pests and diseases that they are able to control. ‘We want to convey a clear and positive message’, Van Lenteren says: ‘A lot is possible in biological control already! The market for biological products is only 2% compared to chemical products. However, the European Union is about to ban more than half of the approximately thousand chemical pesticides that are on the market today. In the meantime, the market for biological control is growing with more than 15% per year.’

In promoting biological control, the health issue of consumers is of course of key importance. ‘But to me, the protection of biodiversity is almost of greater importance’, Van Lenteren states. ‘Decreasing the use of harmful chemical products significantly protects biodiversity. And biodiversity is directly and positively linked to the ecosystem services that protect the majority of our crops.’

To further increase the growth of biological control, Van Lenteren and co-authors propose a system they call ‘Conscious Agriculture.’ Conscious agriculture operates somewhere between conventional and organic and is flexible and non-dogmatic, the article states. It involves participation of all stakeholders in the production and consumption chain, and respects the environment and resource availability for future generations. This is in contrast with conventional agriculture, which concentrates on profit maximization and externalizing the cost of the harmful effects on human health, society and the environment. Van Lenteren adds: ‘Were all stakeholders to adopt this conscious agriculture, it would be no problem at all to feed a world population of nine billion, without harming our biosphere. It was of great importance that the UN and the EU stressed that as well.’

Do you have a question about Biological control? Ask our experts: JC (Joop) van Lenteren
Contactformulier + Meer (1)

In biological control, natural enemies of bacteria, fungi and insects are used to control pest populations.