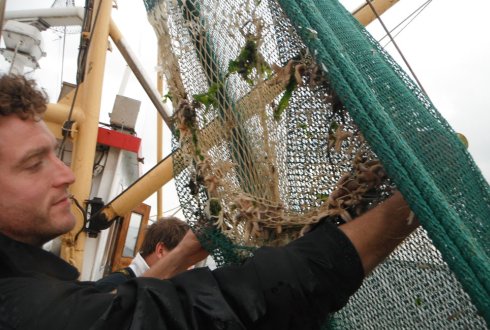 How can fishermen prevent unwanted bycatch? Pieke Molenaar, a researcher at Wageningen Marine Research, is keen to answer this pressing question for fishermen. For his research into smart nets to avoid bycatch, Molenaar has been named one of the most talented young engineers in the Netherlands by De Ingenieur website.

De Ingenieur were looking for the best young engineers of the Netherlands. The result? Thirteen of the most talented young individuals from the world of technology, all of them doing special things to make the world a little better. Molenaar studied Aquaculture and Marine Resource Management at Wageningen University and is now working on bycatch as a researcher in fisheries technology at Wageningen Marine Research.

Bycatch is a major problem in Dutch fisheries. Depending on the species being fished for, bycatch regularly accounts for 50% of the overall catch, and sometimes for as much as 90%. Molenaar is seeking to tackle this problem by means of a smart design for trawler nets – so that, for example, they catch langoustines but let fish through.

In the article on De Ingenieur website, Molenaar reports that fishermen sometimes ask him: "Are you a green?" Groups like Greenpeace paint the fisheries sector in a negative light, he says. He engages fishermen in conversation. "Often they don't even know how much bycatch they have any more. Only when you're staring at that mountain of fish together does the fisherman realise he needs to do something about it."

When developing smart nets, the natural behaviour of fish plays a big role. Molenaar: "When a trawl net is approaching, flatfish go and lie on the bottom, whereas other species, such as haddock, shoot upwards. By introducing panels into the trawl net or closing off sections with sorting grids, we can select for the fish we want." According to Molenaar, sole is the escape artist par excellence among fish, which means there is a lot of bycatch when fishing for sole. "But I have a few ideas for that." Molenaar hopes that in five years' time, Dutch fisheries will be a lot more selective, with less bycatch.

Read more about the varied work of Pieke Molenaar on the website van de Ingenieur.