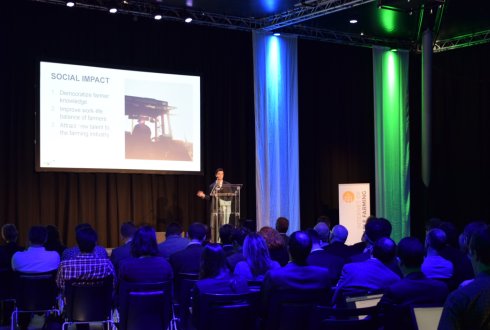 The Internet of Food & Farm 2020 (IoF2020), a €30-million H2020 co-funded project by the European Commission, was officially launched in Amsterdam on 21 and 22 February 2017. An inspiring start of the project enabled project partners to establish a structured collaboration and present their innovative research endeavors, aiming at improving agricultural production through the use of IoT technologies to answer the grand societal challenges. The event gathered more than 140 stakeholders from the European institutions, Member States, academia and industry.

The Dutch government and scientific community are very proud that the kick-off event took place in The Netherlands. Dr. George Beers from  Wageningen University & Research (WUR) and IoF2020 Project Manager welcomed the participants, stating: ‘I am excited to launch this ambitious project with high expectations from the innovative companies involved and experts in the field’. These expectations were raised even higher by Jack van der Vorst from the WUR Board of Directors, who reiterated: ‘IoF2020 is paving the way for the data-driven farming and virtual food chains, to make our world smarter and more sustainable’. Despite great implementation challenges, Marjolijn Sonnema, Director-General of DG Agri & Nature at the Ministry of Economic Affairs, assures the positive impact: ‘Digitized agriculture in Europe will contribute to a more nature inclusive way of producing, to better jobs and new business models, while addressing the challenges of better informing consumers and making food chains more transparent.’ she said.

Mechthild Rohen, Head of the IoT Unit at DG-Connect emphasized the importance of building a sustainable ecosystem for the long-term application of IoT technologies in the European agri-food sector. ‘Agriculture has entered a new era of digital transformation, where farmers, machine producers and other actors increasingly use IoT devices to ensure efficient farming. This includes acquiring data at every stage of the agricultural production. A dynamic ecosystem, working in the best interest of end-users and producers alike, is being formed as we speak’ she stated during the opening plenary session.

A political support from the plenary session was transposed into the successful presentation of the project’s governance and work packages, including 5 areas (dairy, meat, arable crops, fruits and vegetables) and 19 demonstrations throughout Europe - the core of the IoF2020 project.

Following the successful first day, the second day was dedicated to EU-related initiatives such, as the Large Scale Pilots and FIWARE. The presentations emphasized the importance of crowd-funding in the large-scale uptake of IoT technologies in Europe.

The IoF2020 project fosters the large-scale uptake of IoT technologies in the European food and farming sector. With a €30-million budget co-funded by the EU, the project has the potential to drastically improve agricultural production, while demonstrating the added value of smart webs of connected objects. More information can be found on www.iof2020.eu.