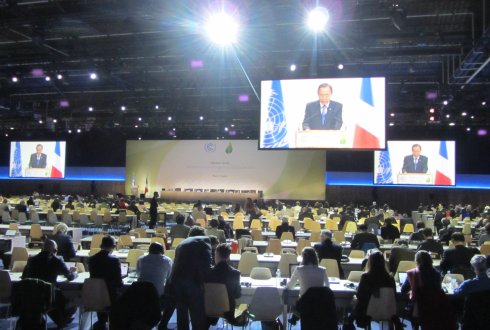 On the twelfth of December, countries universally agreed to mitigate climate change through a legally binding convention, the Paris agreement. Marjanneke Vijge, PhD candidate at ENP, had the privilege to be present at the Conferences of the Parties (CoP) on the day that the agreement was adopted.

Other blogs and reports can update those interested in the process leading up to the agreement, but let me write something about my experience during the day of the adoption, followed by a short reflection on the agreement itself.

The entire day, the atmosphere in the conference centre was elated. During the meeting of the Comité de Paris at 11:30, the French foreign minister and host of the CoP, Laurent Fabius, French president François Hollande, and UN Secretary-General Ban Ki-moon called upon the 196 countries to adopt the agreement. Their speeches were thus that I could not see how any country could not oblige. Hollande, for example, stated that this day could be a message of life coming from Paris, after France’s great suffering due to the terror attacks one month earlier. The meeting was very short. A new version of the agreement was announced to be available later that day. Until that time, most people were simply hanging around, attending some press conferences, or trying to get some sleep which they had lacked during the two weeks of negotiations. Shortly after the agreement was released, people started queuing up to get a printed version, which many read with relish.

The Comité de Paris reconvened at 17:30, but it took nearly two hours before Fabius officially opened the meeting. The main reason for the delay was an interesting one: contestation over one single word in the agreement, namely the difference between “shall” and “should”. Where “shall” signifies a legal obligation, “should” does not. The US could not support an agreement stating that developed countries “shall” take the lead by reducing carbon emissions, while developing countries “should” reduce their emissions. Delegates feared, however, that re-opening the text for revision would lead to multiple other requests for alterations. In the end, the changing of the word was passed off as one of the other minor linguistic or technical revisions that were read out just before the adoption.

The adoption itself was done before I realized what had happened. Minutes after the announcement of the linguistic errors, Fabius banged his gavel to declare the adoption. What followed were loud cheers, at least five minutes of standing ovation (followed by several others during the following hour), many hugs, and even tears. Many called it a “historic moment”, and it truly felt that way. I had goose bumps and felt the joy around me. Never before have I been so emotionally involved in negotiations. The adoption was followed by many long, and mostly very positive speeches by country delegates, which lasted until 00:30 that night. Most people had by that time already left, no doubt to celebrate the adoption in downtown Paris. Also inside the conference centre, people were celebrating with beer, food and wine, and loud applause and cheers of joy could often be heard from the country delegation offices until late in the evening.

So far the joy of the moment. But what does this agreement really mean? The success of the agreement entirely depends on what countries decide to do with it in the coming years. No binding individual country targets have been agreed upon. Instead, countries agreed to implement their so-called (Intended) Nationally Determined Contributions ((I)NDCs), in which they outline plans for emission reductions in the coming years. A UNEP report shows, however, that even if every single INDC is implemented according to plan, global warming would still amount to much more than the 2°C target mentioned in the agreement. In order to reach this target, the world would need to be carbon neutral by the second half of this century. Thus, what is needed, and agreed upon, is to ratchet up country’s ambitions in the coming years.

There are those, mainly among civil society groups, who criticize the Paris agreement for being too weak. The agreement is certainly not strong on all parts, and it is unlikely that the 2°C target will be reached in the near future. However, it seems that a shift in mindset has taken place among countries to stop evading curbing their green house gas emissions and start working together to combat climate change. Most country delegates lauded the agreement as an important step to further build upon in the coming years. In that sense, this agreement may turn out to be a turning point in the climate change negotiations. Rather than having to deal with the continuous frustration of stalling negotiations, countries may now take a constructive approach with something positive to build upon. The coming years will tell…