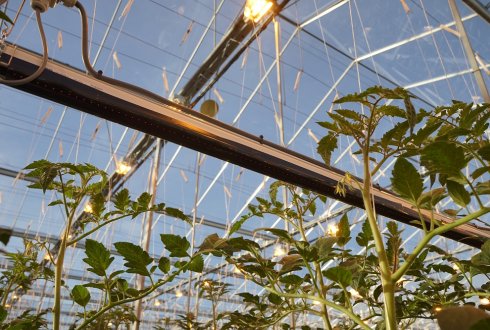 In the winter of 2015/2016, the business unit Greenhouse Horticulture of Wageningen University & Research grew tomatoes under LED lamps with additional far-red light. This resulted in a production increase and provided sufficiently interesting results to do a trial at a commercial company. In November, the far red lamps were installed at the tomato company Prominent I and the first effects are already visible.

For the tomato producers who visited this experiment a number of times, these results provided sufficient reason to do a trial at a commercial company, where far-red light was used in addition to HPS lamps. In November 2016, we started a trial at Prominent I with four experimental plots of 25 meters each. In one of the plots, we use 30 µmol/m²/s far-red LED light above the canopy, while in another plot, the same light intensity is applied as inter lighting. For Kas als Energiebron (Greenhouse as an Energy Source), it is important to determine to which extent a low-intensity far-red light could replace part of the assimilation light in order to reduce the electricity consumption. For this reason, in one of the plots we apply 10 µmol/m²/s far-red light in between the crop. The fourth plot serves as the control, so no far-red LEDs are being used.

In the coming months, the effect of the far-red light on the plants will have to become clear. Based on the results from last year, we expect that the crop will elongate more and the leaves will become less green. However, we also expect that the tomatoes that will be harvested will have an higher average fruit weiht. We will have to wait and see whether this will be the case. During the trial, plant height and leaf length are being measured at weekly intervals. One week after turning on the far-red LEDs, plants under additional far red light were already found to be a few centimeters taller than those without additional far red light. This implies that that the far-red light, in conjunction with HPS, has an effect on the crop. How this will evolve, will become clear in the coming months.

This project is funded by the growers associations Harvest House, Prominent, Tasty Tom, Looye, RedStar, and The Tomato Company, as well as the Kas als Energiebron programme. This is the innovation and action programme of LTO Glaskracht Nederland and the Ministry of Economic Affairs.