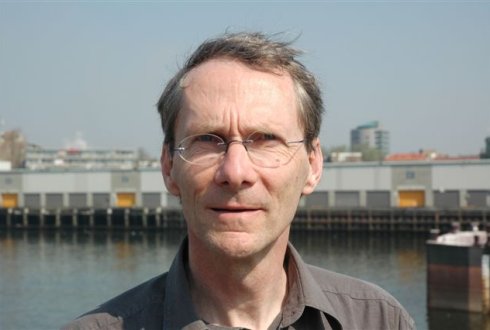 Fishing conflicts have existed as long as fishing itself. In several seas – such as the North Sea – a good balance has been struck between the fleet capacity of the fishing industry and the amount of fishing the area can withstand, but in other parts of the world, overfishing is still a major problem. With new problems rearing their head such as the effects of climate change and the construction of large-scale wind farms at sea, the need for independent and internationally organised fisheries science is greater than ever before. This was the message issued by Prof. Adriaan Rijnsdorp in his farewell speech as he said his goodbyes to Wageningen University & Research.

“As fascinating as a diamond,” is how Rijnsdorp describes the field of fisheries science, to which he has actively contributed for the past 38 years and in which he will continue to do so as he conducts research into pulse fishing. “The field is so multifaceted and everything is constantly in motion: the natural dynamics of fish stocks and ecosystems, the dynamics of fishers and fisheries, not to mention social and political conflicts affecting the fishing industry.”

Conflicts within the fishing sector are nothing new. “Fishing wars have been a recurring factor throughout the history of the entire world,” says Rijnsdorp. “These may take on the form of arguments about fishing equipment and mesh size.” For example, around 1580, there was a major conflict about use of the beam trawl, the United Kingdom and Iceland engaged in the 'Cod Wars' in the mid-20th century, and today, a heated debate on pulse fishing echoes throughout Europe.”

Fisheries scientists advising government bodies can easily get sucked into these conflicts. “The collapse of vital fish stocks in the 1970s caused major concerns about overfishing and damage to the ecosystem,” explains Rijnsdorp. “Biologists working for universities and interest groups rejected the findings of fisheries scientists working as government advisors as the academics believed the advisors had been swayed by the interests of the fishing industry, and in turn, the advisors accused the academics of activist science.”

Although Rijnsdorp believes the concerns about overfishing are justified (according to the Food and Agricultural Organisation of the United Nations, 35% of all fish stocks in the world are still being overfished), there is promising news: fish stocks in many areas are recovering from the effects of overfishing. One example of this is the recovery of plaice stocks in the North Sea: the species on which Rijnsdorp published an acclaimed biography in 2016 titled Schol in de Noordzee (Eng: Plaice in the North Sea).

In the author's opinion, this account of the living conditions of plaice clearly illustrates the complexity of research in the field of fisheries science. “Fish stocks and the natural world will never cease to amaze me.” One such surprise was the effect of the Plaice Box, established in 1989: an area in which large trawlers were banned in order to allow young plaice to grow and develop without any disturbance from commercial fishers. “The expectation was that plaice stocks would improve and unwanted by-catch of small plaice would decline, but this did not happen. Young plaice left the area likely due to rising temperatures. It is unclear whether the reduction in plowing of the sea bed also played a part. What is does clearly demonstrate is that you can never be certain of the effect government policy will have.”

Rijnsdorp sees a rich tapestry of challenges ahead for the discipline of fisheries science. How can we use the productivity of the ecosystem to enable food production with the smallest possible ecological footprint? How will climate change and unintentional genetic selection caused by the fishing industry affect this productivity, which in turn affects the amount of fish that can be sustainably caught? And how can the large-scale application of offshore wind energy go hand-in-hand with sustainable fishing? To answer these questions, Rijnsdorp believes that new fundamental knowledge must be sought in both ecological and social sciences.

“This knowledge is vital to a sector in which strongly conflicting interests and the growing influence of activist groups has resulted in people treating the symptoms rather than seeking solutions to the underlying problems,” said the departing professor, who describes the EU's 2012 landing obligation as a prime example of such measures. “Even today, nobody has any idea of whether the landing obligation will have the desired effect. The debate about pulse fishing is another example of how activist NGOs are making scientifically unfounded claims in order to influence government policy.”

He believes this highlights the importance of widely accepted international advisory bodies such as ICES, which provide independent scientific advice to European government bodies. “The new challenges ahead – which will further intensify the conflicting interests between the various groups – mean the need for independent and internationally organised fisheries science is greater than ever before. The natural and social challenges mean turbulent waters are ahead, and the fisheries-science community will have to stand firm in order to navigate them.”