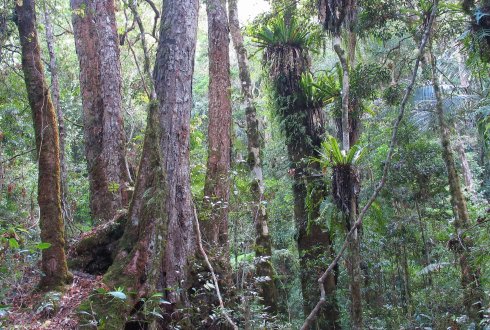 The most extensive study on tree competition to date has revealed wood density, specific leaf area and maximum height affect competition in predictable ways across all forested biomes worldwide. Further these traits capture trade-offs between growth in the open versus growth under intense competition. A research team, including Wageningen University scientists, published the results in the December 23 Nature issue.

Trees grow in crowds – we call them forests. Competition between neighbouring trees has a big impact on their growth. But how to generalise across the huge species diversity fund in the estimated three trillion trees covering all the biomes of earth, with up to 53,000 tree species just for the highly diverse tropical biome?

Forests are crucial elements of the earth system and cover large areas from boreal to tropics. They host an astonishing diversity of tree species encompassing many forms and strategies. Complex interactions among neighbouring species strongly influence the dynamics of forests and their functioning as ecosystems. Ecologists have long sought an approach that might allow competition to be predicted in a general way across the tens of thousands of different tree species worldwide. The research published in Nature achieved this via so-called ‘functional traits’ of species - wood density, specific leaf area and maximum height. Such traits were already known to have globally consistent effects on individual plant physiological functions. The new research reinforces that functional traits can provide a foundation for predicting dynamics and interactions between plant species on earth.

Interestingly and perhaps surprisingly, trait dissimilarity between species did not soften their competitive impact on each other. Rather, traits underpinned trade-offs. For example, species with high wood density grew more slowly in open ground but were more tolerant of competition. In a landscape where disturbances created patches of open ground that then became more crowded over time, both low and high wood densities could coexist despite competition.

An international collaboration of almost 40 researchers brought together national forest inventories and research plot data spanning three million trees in over 140,000 plots across the world. Lead author of the Nature publication Dr Georges Kunstler is based in Grenoble at IRSTEA, the French research institute for environment and agriculture. Data synthesis was undertaken at Macquarie University in Sydney, Australia.