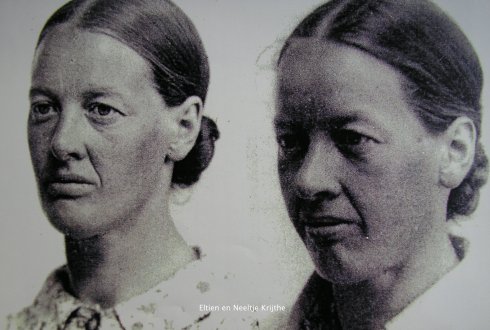 When the war broke out in 1940, Eltien and Neeltje Krijthe worked at the Agricultural College. They became involved in resistance work and took two Jews into hiding. In 1944 the SS conducted a raid and the sisters were captured. Neeltje survived the war and returned to Wageningen.

The twin sisters from The Hague began studying horticulture at the Agricultural College (Landbouw Hoogeschool) in 1927. They moved in together, living in the apartment above the farm De Wolfswaard near the river Rhine, were members of the Wageningen Women’s Student Union (WVSV) and rowed at Argo. Both remained in Wageningen after their graduation to conduct agricultural research; Eltien at Horticulture and Neeltje on the Elm disease committee at the genetics laboratory and later at Plant Physiology.

When the war broke out in 1940, the sisters became almost inevitably involved in resistance work. Zwaantje Bosman, the owner of the farm, lived on the ground floor of the Wolfswaard with her son Jan van Roekel. Van Roekel was a leader in the resistance and the situation of the Wolfswaard made it a good base of operations for the resistance in Wageningen. The Krijthe sisters kept their illegal activities quite simple during the start of the war. They brought ration cards to addresses with people in hiding, raised money and spread illegal pamphlets.

The entrance of the apartment of Eltien and Neeltje Krijthe was at the back side of the house. Photo: Rijksdienst voor Cultureel Erfgoed.

In 1942 two Jewish refugees came to live with the Krijthes, the brother and sister Marie and Theo Stoppelman. For a long time this worked very well, until the SS showed up at the door at five in the morning of 20 May 1944.

The visit followed the arrest of three residents of Wageningen two weeks earlier. They were in possession of radio parts and one of them was involved with the illegal broadcast that operated out of the Wolfswaard. Zwaantje opened the door to the SS in her nightgown. At the same moment Van Roekel and a friend in the resistance sneaked out into the swamp via the threshing room.

The SS wanted to inspect the apartment of the Krijthes, which was accessed via the back door. Bosman tried to buy time by first getting dressed before bringing them to the entrance. In the meantime the Krijthes and their refugees realised what was going on, but the balcony door was locked. Their way to the threshing room had been screwed shut, probably the work of a traitor. The Krijthes and Marie and Theo Stoppelman were trapped.

The four of them were taken to Arnhem for a hearing and held in the detention centre. Five days later Eltien and Neeltje were transported by lorry to camp Vught. During their imprisonment there, they worked for Philips. After four months they were transferred to the women’s camp at Ravensbrück. The women had to endure sadistic treatment by the guards, always be at the ready, received less and less to eat and drink and went largely without hygiene. On top of this disaster, Eltien became ill.

On 6 September Neeltje departed for camp Reichenbach. In her memoirs she writes: “Fifty women were selected, I among them, but not my sister, who had angina. Our protests were to no avail; we were separated, and I never saw her again.” Neeltje ended up in camp Hausberge and later in camps Fallersleben and Salzwedel. The end of the war was approaching and she became sick. On 14 April 1945 the camp was liberated. Neeltje was taken in by a Catholic institution where she was cared for by a nun. On 6 June 1945 she had recovered sufficiently to travel by ambulance to Bennekom, where her parents lived. She did not yet know that in the meantime Eltien had died in Ravensbrück, presumably on 4 March 1945.

In 1946 Neeltje resumed her research on seed potatoes at the Agricultural College. She was hired full time by the Central Bureau for Agricultural Research in Wageningen. The war and the feeling that she was betrayed scarred Neeltje. When the WVSV organised a garden party at the Wolfswaard, she took it as an insult to her and her sister, exclaiming “Doesn’t anyone know what happened there?” WVSV apologised but held the garden party anyway. Somewhat later Neeltje discontinued her donorship to the WVSV. A few months before she died in 1990, Neeltje visited De Wolfswaard for the last time.

In 1946 a memorial stone was unveiled in the Aula of WUR to memorise the victims of the war. Eltien Krijthe is mentioned among them. Photo: Didi de Vries

In 1952 Neeltje was awarded the Mobilisation War Cross and in 1973 she received the Yad Vashem in the Jewish Cultural Centre in Amsterdam, since she had risked her life to protect Jews. Eltien received the medal posthumously and is mentioned on the memorial stone in the auditorium of WUR and on the Wall of Names of the Monument for the Fallen on the Costerweg.

Read more about alumni of WUR

Eltien and Neeltje Krijthe studied at the Landbouw Hoogeschool between 1927 and 1934. Afterwards they remained in Wageningen to conduct agricultural research. Photo: Wageningen 1940-1945.

From 6 to 9 May theatre play Marked (Getekend) tells the story of students in Wageningen during the second world war. Who signed loyalty to the occupier and who refused?