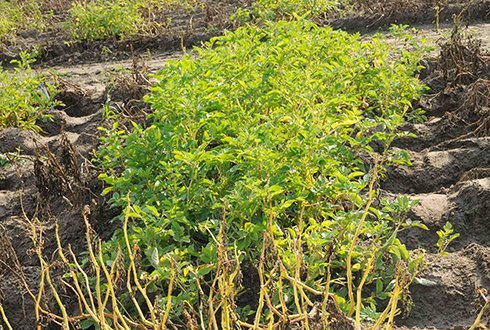 Over recent years a team of European scientists has mapped the genetic variation spread of the cause of the much-feared potato disease phytophthora. This work was realised on a unique scale, with samples being collected and characterised in some 30 European countries. Geert Kessel: “The goal is to combat the disease in an increasingly specific way via the selection of varieties and tools.” Together with his colleagues from Wageningen University & Research, Kessel provides other countries with advice on a similar approach. In the meantime, the ERA-NET IPM Blight 2.0 project continues to develop the approach as a new standard for the integrated management of plant disease.

In addition to its size, another unique feature of the European EuroBlight partnership is that research institutions worked closely together with the potato farming sector in analysing the genetic variation and genetic changes in Phytophthora infestans. Employees from pest management companies, for example, collected samples of active damage in the field throughout Europe during the growth season of the potato. Using specially developed stamp cards they made a kind of ‘fingerprint’ of the DNA of the pathogen. Laboratories in the Netherlands, Scotland and France are analysing the samples and storing the results in a central database. This way some 3,000 samples from 30 countries have already been typified in the past three years.

What type is found where?

The scientists have gained good insight into the genetic diversity of Phytophthora infestans. Approximately three quarters of the genotypes discovered occur in various places in Europe; these are the so-called clonal lines. The other 25 per cent involves new varieties, developed through sexual reproduction and natural mutations of the fungal pathogen. New types are most commonly found in the intensive cultivation areas where the risk of disease is greatest.

Specific use of chemistry and varieties

By monitoring the genetic shifts in the populations, the potato industry can more specifically combat the disease. Growers and their consultants can better estimate whether a certain chemical group of pest management products is still sufficient or whether the pathogen has adapted to the active substance, for instance. Similarly, they can predict which resistant potato varieties will perform well.

Closely monitoring the pathogen and aligning the cultivation measures is the basis for what is called Integrated Pest Management (IPM). A new European project is further developing the setup of EuroBlight in ERA-NET IPM Blight 2.0, linking the extensive disease monitoring to online tools for breeders and consultants. The approach to the potato disease should become an example for the management of diseases in other crops.

In other parts of the world such as Asia and South America, initiatives have been started to monitor the genetic diversity of potato disease as well. Kessel and his colleagues are supporting these efforts. “This does not mean that the management of phytophthora will become easy,” says Kessel. “In the Netherlands and neighbouring countries, growers had a hard time managing the plague this year. What we can do is use the available knowledge and tools as well as possible.”

This article was also published in Plant Life, the digital newsletter on plant research at Wageningen University & Research. Do you want to receive Plant Life eight times a year in your mailbox for free?