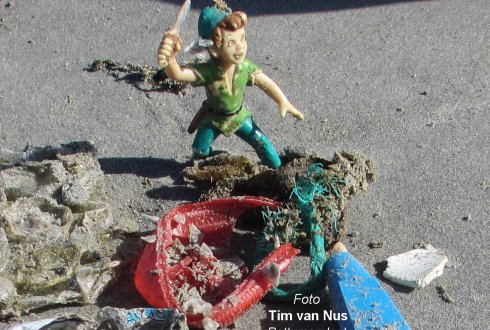 After reports that unusually large amounts of plastic waste was found on the beaches of the Wadden Sea Islands, volunteers in the fulmar study group were asked to watch out for debris in an attempt to document these strandings.

On May 12 2014, beach surveyor Maarten Brugge reported an unusual quantity of small plastic debris on  the tideline of Texel, the most western of the Dutch Wadden Sea Islands (photo 1).  On May 14, the tideline on Texel proved to be largely covered with algal foam, but on a few of the less covered stretches it was clear that small plastic debris was still coming ashore (photos 2-3).

A sample was taken by collecting  all seaweed, debris and the upper sand layer from a 50cm wide by 5 m long patch of the tideline (photo  4).

Much of the plastic debris was remarkably old with a degrading surface. Among the smaller items, a highly diverse quantity of industrial plastic granules was present, in an abundance not seen in our tidelines since the 1990s. Of course the usual fresher debris with e.g. much rope, netting  and balloon remains was also present.

Larger pieces of debris regularly showed a smaller type of goose barnacle growing on them (photos 5-7).  Goose barnacles are sedentary crustaceans that grow on objects floating in the sea,  filtering food from the water using  branched arms.

In an attempt to document this unusual stranding event, an email was sent to all the volunteers in the fulmar study asking them to watch out for similar small debris in combination with goose barnacles. Soon after, Sytske Dijksen (of ECOMARE on Texel) responded that the barnacle was an unusual warm water species: the Buoy Barnacle (Dosima fascicularis; photo 8).

On May 16 and 17, plastic debris and Buoy Barnacles were also reported from Vlieland (Marchien de Ruiter, Stichting de Noordzee, photo 9) and the most eastern part of the Dutch Wadden Sea by the bird wardens of Rottumerplaat (Tim van Nus and Jasper Zoeter; photo 10). But after those reports, the situation seems to have returned  to ‘normal’ meaning usual quantities of litter washing ashore but without the addition of much small plastic debris or the Buoy Barnacles.

Samples are being studied

At the moment we are sorting through the sample taken from the tideline on 14 May. Old bits of seaweed, plant remains and small debris prove to have large numbers of very small Buoy Barnacles attached to them (photos 11-12) which only become evident with  detailed inspection. The debris collected contains many hundreds of industrial plastic pellets and small plastic fragments. In addition there are a lot of small lumps of paraffin and palmoil plus an incidental lump of tar.

Cause of the unusual stranding is still unclear

The scale of this event thus includes at least the full North Sea coast of the Dutch Wadden Sea. No reports were received from abroad, but the differences from the usual litter situation are not so easy to  see. The Buoy Barnacles probably originated from warm water south of the Bay of Biscay.

For the time being, we can only speculate about scale, reason and origin of this unusual stranding of plastic debris. Extreme flooding, storm disturbances of coastal sediments or even the North Atlantic gyre are all possible factors. Further work on the sample taken, including examination of remains of plants, may shed further light on the source area.

This story is to be continued!

Read more in the Dossiers: