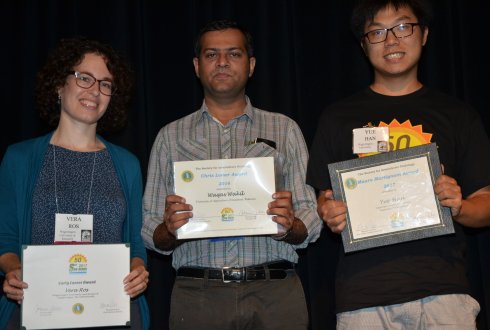 Vera Ros (left) was awarded the Early Career Award from the Society for Invertebrate Pathology at the conference of this society in San Diego (USA) last week. This award recognizes outstanding contributions from invertebrate pathologists who are in the early stage of their scientific career. Vera Ros is Assistant Professor at the Laboratory of Virology. During her career she studied the evolution of host-parasite interactions, with a strong focus on interactions between arthropods and micro-organisms. Currently she studies virus – insect interactions, focusing on virus-induced manipulation of insect host behaviour. Her work is aimed at clarifying which viral genes modify host behaviour, and which pathways in the host transduce the virus-induced signal into a change in behaviour. In addition, she studies viral invasion of insect brains to manipulate host behaviour. Furthermore, her research includes the study of covert virus infections in insects (having a huge impact on mass reared insects) and ecological implications of baculovirus infections.

PhD-student Yue Han (right) received the Mauro Martignoni Award from the Society for Invertebrate Pathology, the Society’s premier award for student research. Yue Han studies baculovirus-induced behavioural changes of caterpillars, which is thought to enhance the spread of these viruses in the field. Caterpillars infected with baculoviruses become hyperactive and climb to the top of plants and crops, before they succumb to the disease. Han is revealing the molecular mechanism that lead to the observed behavioural changes, and studies the role of light and phototaxis in this process. His work has already lead to several publication in high ranked journals in the field, including a review on virus-induced behavioural changes. More publications are foreseen in the coming year, covering exciting findings. Yue Han performs his PhD in the Laboratory of Virology, under supervision of Prof. Monique van Oers and Dr. Vera Ros.