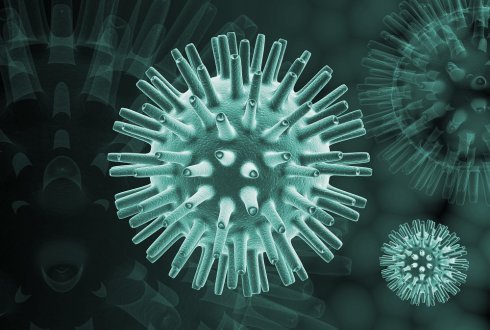 New and old viruses still threaten the lives of plants, animals and humans. Influenza, foot-and-mouth disease and tomato spotted wilt are just a few of the virus infections requiring continuous vigilance. In the inaugural address Monique M. van Oers gave on 16 January upon accepting the post of Professor of Virology at Wageningen University, she explained the challenges facing researchers as a result of the sophisticated way in which viruses operate.

In her inaugural address entitled Kunst- en vliegwerk – Wisselwerkingen tussen virus, gastheer en vector (‘Whatever it takes – interactions among viruses, hosts and vectors’), Professor Monique van Oers talked about the relationship between viruses and their plant, animal or human hosts. She also zoomed in on the role of virus-transmitting insects – the vectors – such as mosquitoes and aphids.

Viruses really started to thrive some 10,000 years ago when agriculture was introduced. As a result of this, the human population grew and animals and humans lived much closer together, facilitating the transmission of viruses between them. An increase in arable farming led to monocultures that were beneficial to plant viruses. Some virus types were introduced from elsewhere. . For example, the Huns brought rinderpest to Europe in the fourth century, and similar epidemics were later caused by the Mongolian armies or cattle trade with Russia.

“We can conclude from these examples that virus problems are to be expected whenever population densities increase and environmental factors change, due to human activity or some other cause", Prof. Van Oers stated. “So it’s not surprising the boom in intensive aquaculture is being accompanied by virus problems in fish and prawn farming." She added that in order to detect those problems in time, to run routine checks and develop prevention programmes, it would be advisable to analyse all the viruses present in a particular system carefully by means of modern sequence-analysis techniques.

Problem detection may also allow enormous reservoirs of unknown viruses to be discovered because probably all cellular organisms are susceptible to viruses. In addition, codes of viral origin are continually being found in the genetic information of organisms, which can give insight in virus evolution. "It’s highly conceivable that we know  only the tip of the iceberg regarding our knowledge of viruses", Van Oers believes. She succeeds Prof. Rob. W. Goldbach who died in 2009. Prof. Just M. Vlak was the interim Chair Holder of the Laboratory of Virology, but he has now been accorded emeritus status.

The genetic material (RNA or DNA) of viruses can adapt itself relatively rapidly to host conditions. Prof. Van Oers’s group will be concentrating on what it takes for viruses to manipulate their host or vector and to increase their likelihood of survival and dissemination. Her research concentrates on the way in which a battle is fought: the virus attacks and the host resists. Then comes the counterattack from the virus, followed by the second line of attack from the host. This may be countered yet again by the virus. The research focuses on the viruses of plants and insects and on human and animal viruses transmitted by insects.

The viruses that manipulate their host’s behaviour will be given special attention. Baculoviruses that cause hyperactivity and climbing behaviour in caterpillars provide the model system. Basically, these viruses can spread over a greater area as a result of their host’s altered behaviour, so there is more chance of infecting another victim. The virologists at Wageningen would like to unravel the molecular mechanisms underlying manipulation of insect behaviour. Baculoviruses are also used a great deal in developing modern vaccines and gene therapy vectors, another field in which Prof. Van Oers is active.