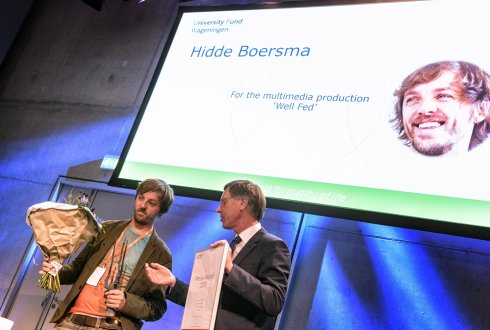 Science journalist Hidde Boersma and colleagues have receive the triennial 2017 Press Prize for his documentary triptych “Well Fed”. During the Opening of the Academic Year at Wageningen University & Research on 4 September 2017, he received a Wageningse Boom (Wageningen tree) statuette, a distinction, and a sum of 2500 euros from the chair of the University Fund Wageningen, Jan Karel Mak.

According to the jury, Hidde Boersma - and his colleagues - deserves the Press Prize for his exceptional production and the diverse ways that the subject was portrayed. The jury was specifically pleased with the use of various media and different perspectives, which deliver consistent quality. The production is exceptional in its accessibility and ties in with current social debate.

The jury, which consists of four representatives from science and journalism, received ten nominations in the form of documentaries, programmes, and websites. The jury was impressed by the high degree of skill and diversity of the submissions.

For the documentary “Well Fed”, Hidde Boersma travelled with director Karsten de Vreugd and camera man Philip Fountain to Bangladesh in search of answers to questions about genetically modified foods. This resulted in a personal story which also has a solid scientific foundation. The story about the aubergine as an example of how genetically modified food plays a role in the food supply of a growing global population extends beyond the limits of a single documentary. The portrayal of the topic through several methods, including a scrolling story that was also translated and then published by Al Jazeera, shows that the form, content and coordination were well thought out.

Each segment is executed well, with consistent, high quality. It is a production that compels you to read further, see more, and reflect. Thanks to its personal approach, Hidde Boersma has created a production that is not presented as permanent truth. This accessible approach and connection with current debate and research make this a submission that more than meets the requirements for quality, accessibility, and the relationship with the scientific domains of Wageningen University & Research.

Hidde Boersma (1980) is a freelance science journalist. As a molecular biologist with a PhD, he focuses primarily on biotechnology, agriculture, ecomodernism, and bioethics. Publications he writes for include the Volkskrant, the Correspondent, and VICE. He is also a member of the journalists collective Bureau Wibaut. He released his first book “Ecomodernisme” together with co-authors earlier this year.