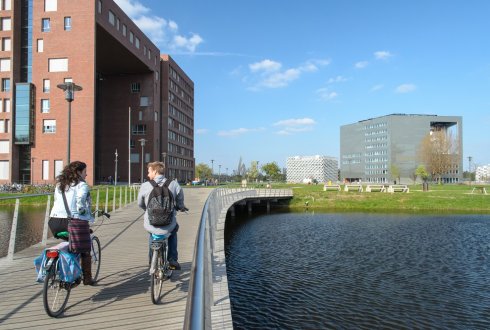 The executive board of Wageningen University & Research appoints three professors holding a personal Chair on the basis of their outstanding teaching and research skills. These are the soil researchers Gerlinde De Deyn and Jan Willem van Groenigen as well as the animal nutrition researcher Walter Gerrits.

Gerlinde De Deyn
Prof.dr.ir. G.B. (Gerlinde) De Deyn (Aalst, Belgium, 1975) has been appointed to a personal chair at the Soil biology and Biological soil quality group. The effective date for her appointment is 1 October. She held a position as associate professor at this group.
The research of Prof. De Deyn focuses on the interaction between plant diversity in space and time, the composition of soil biota and the ecosystem processes governed by these plant-soil interactions. She uses a trait-based approach across plants and soils from natural and agricultural systems.
Gerlinde De Deyn studied at the University of Gent, and got her PhD-graduation at Utrecht University. She worked at NIOO-KNAW, but also at universities in Canada en the United Kingdom.

Jan Willem van Groenigen
Prof.dr.ir. J.W. (Jan Willem) van Groenigen (Den Helder, 1970) has been appointed to a personal chair at the Soil Biology and Biological Soil Quality group as per 1 October 2016.
Prof. Van Groenigen studies the influence that soil biota (in particular soil fauna and plant roots) exert on nutrient cycles in agricultural systems. His work contributes to the development of a more sustainable agriculture with low greenhouse gas emissions and high nutrient use efficiency.
Jan Willem van Groenigen graduated ‘cum laude’ at Wageningen University and received his PhD there in 1999. He worked as a postdoctoral fellow at the University of California in Davis, USA and at the Wageningen research institute Alterra (now Wageningen Environmental Research). He previously held a position as Associate professor at the Soil Biology and Biological Soil Quality group.

Walter Gerrits
Prof.dr.ir. W.J.J. (Walter) Gerrits (Bakel en Milheeze, 1964) has been appointed as personal chair as per 1 October at the Animal Nutrition Group of Wageningen University & Research. He was an associate professor at this group.
Walter Gerrits is specialized in digestive physiology and in protein- and energy metabolism of growing animals, with emphasis on quantitative aspects of nutrition. He will be focusing on customized nutrition, digestion kinetics and metabolism & health.
Walter Gerrits graduated in 1989 in Animal sciences at Wageningen University, and defended his PhD thesis in 1996. He worked as an assistant professor and later as an associate professor in research and education at the Animal Nutrition Group. He also was a researcher at TNO Food & Nutrition.