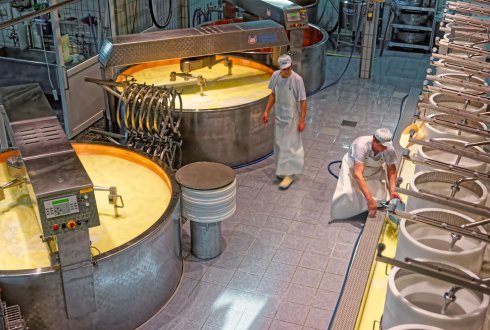 The EU28 food and drink industry performed well on international trade indicators, unlike on indicators based on valued added. Overall, the EU28 has a weak competitive position in the food and beverage manufacturing industry, when compared with other large international producers such as USA, Brazil, Canada and Australia.

Even the top 10 largest countries of the EU28 remained weak compared with the international producers. That is the conclusion of the LEI Wageningen UR report ‘Competitiveness of the EU food industry’. The report compares the years 2003-2007 with the period 2008-2012.

This comparison highlights various developments: fisheries used to be one of the strongest European food manufacturers, but became one of the weakest. The dairy sector, however, has developed in the opposite way. The meat sector – the largest in turnover – remained weak over both periods, but the EU28 animal feed manufacturers have enhanced their already strong competitive position.

The size and competitive position of the food and beverage industry vary between the member states of the EU28. Even within the ten largest producers, which account for 86% of the total turnover, the variation is large. What stands out is how Poland and the Netherlands have switched positions. Poland’s total food and beverage manufacturing industry was the strongest in period one, but one of the weakest in the second period. In contrast, the Netherlands was one of the weaker, but managed to get on top. The developments between EU member states vary also between the different sectors. For example, the Polish competitive position of meat manufacturing improved, whereas in the Germany deteriorated and for dairy, the Italian position improved and the Irish deteriorated.