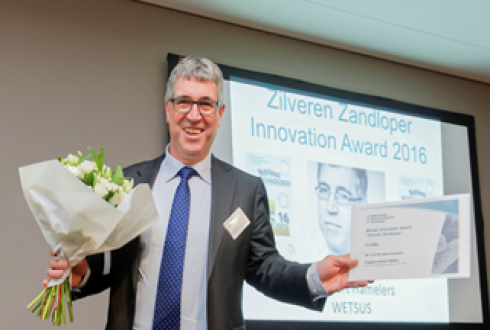 In April 2016, scientist Bert Hamelers was awarded the Zilveren Zandloper Innovation Award. This prize is made available every other year by the Dutch Biotechnology Society (NBV) to one or more persons, or an organization, that has successfully turned biotechnology science into a business. During his previous scientific work at ETE Hamelers was the driving force behind the foundation of several spin-off companies. His ideas and research have resulted in 22 internationally filed patents and three highly successful spin-off companies. The jury mentioned his impressive track record in biotechnology as a group leader at ETE and currently as a program director at Wetsus, European Centre of Excellence for Sustainable Water Technology. According to the Jury, Hamelers’ outstanding achievement in applied research has led to ground breaking innovations and the establishment of successful companies that contribute to solving the biggest global challenges the world faces today.

Dedicated students
Hameler’s sees his contribution to science mainly as generator of ideas. ‘Together with a team of dedicated PhD- students, we managed to put those ideas into practice and establish several companies’, the prize winner says.’ Famous examples of these spin-off firms are Plant-e, where plants play a key role to generate electricity, ChainCraft operating a pilot plant to synthesize valuable components from organic waste, and last but not least REDSTACK aiming at generating Blue Energy. In the blue energy pilot plant at the Afsluitdijk electricity is generated by mixing salt and fresh water. The ‘waste’ product is brackish water. This will be utilized to develop a natural transition area between the Wadden Sea and the freshwater IJsselmeer.

Disappointment
But success doesn’t come easy. For example, in these case of ChainCraft it was preceded by disappointment. ‘We were trying to produce ethanol from volatile fatty acids, formed by fermenting organic waste’, Hamelers says. ‘We succeeded, but then we noticed to our disappointment that these alcohols were disappearing again. More or less by coincidence we found out they were converted in valuable compounds, which now form the basis of ChainCraft.’