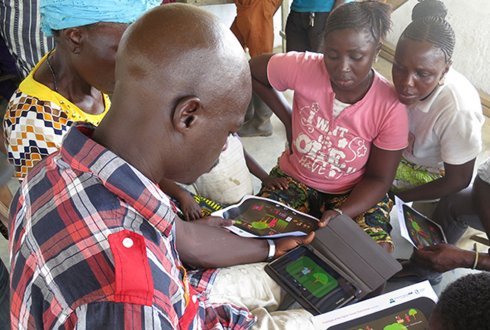 FairMatch Support, developer of sustainable supply chains contacted the Wageningen University & Research Science Shop to explore alternatives for the conventional certification trainings for cocoa farmers in Sierra Leone. Due to the Ebola outbreak in Sierra Leone, gatherings with more than 5 farmers at a time were not allowed. This urgent situation coincides with a broader debate regarding the assumed effectiveness of current extension models for farmers producing for the global market.

This initiative resulted in the design and the development of a prototype Digital Farmer Field School (DFFS) called Kusheh na minem Fatu, en mi na koko farmer / Hello, I am Fatu and I am a cocoa farmer. The testing of the protoype took place in Kailahun and Kenema district in Sierra Leone.

The DFFS facilitates interactions between farmers in groups and with trainers in the back office, whereby farmers can consult information that is provided on a tablet and contact trainers in the back office for support with the same device. This innovative interaction model is based on audio visual contents and fits the needs of functional illiterate farmers in Sierra Leone. Farmers, both male and female, young and old, showed and expressed a keen interest, a high level of motivation and ability to use the DFFS. A promising sign is that farmers used all the functions of the DFFS, including making phone calls about farms issues with the back office. Farmers used the DFFS strategically for their business, taking photos of diseased cocoa pods to be able to discuss pest and crop management amongst themselves and with trainers.

The DFFS provides an alternative interface for interactions between farmers, trainers and traders which allows more articulated knowledge exchange. The strength of the DFFS lies in enhancement of the position of both female and male famers to play a more autonomous role and that training can be highly adapted to their needs.

On Friday April 8th the report was presented to Mohamed Fofanah, director of Jula. Jula, a local Business Development Service in cacao development, is partner of FairMatch Support in Sierra Leone and in cooperation with the research group Knowledge, Technology and Innovation of Wageningen University and Van Hall Larenstein, University of Applied Sciences, responsible for the testing of the prototype DFFS. The development and implementation of DFFS application is ongoing. In the coming years FairMatch Support is aiming to finalise DFFS in collaborate with diverse investors.

Films for the prototype

Sierra Leone Diaspora in the Netherlands