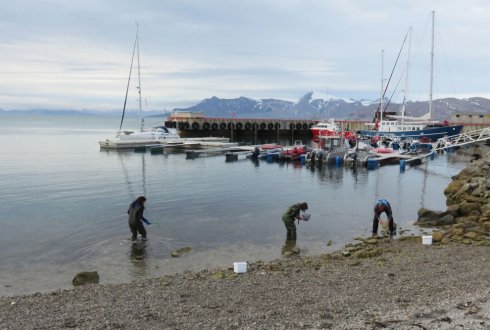 As climate change is driving the decrease in sea ice in polar regions, new shipping routes through the Arctic waters are becoming available for use. This increased human activity in the area, however, poses several risks for this stunning and relatively pristine area.

Shipping is the most common vector of transportation of aquatic organisms to new locations where they do not occur naturally. If these organisms become established in the new location they can affect the natural environmental balance by disrupting the food web through competition, predation or by carrying diseases or parasites. It is therefore important to take steps to prevent these ‘alien species’ (or ‘non-indigenous species’) from entering and becoming established in the Arctic environment.

To effectively manage alien species in the Arctic we need to build both our knowledge of the species that live there, and of those with the potential to be introduced so that we can identify them and better mitigate their introduction.

In the project Arctic Aliens we will develop efficient methods to identify the presence of alien species using DNA barcoding. This will allow us to detect species in samples en masse without the labour intensive taxonomic identification of individual specimens. To do this we will build on an existing database of DNA barcodes for species from the Arctic as well as those that may spread there.
The first step was therefore to select species with no existing sufficient DNA barcode that were listed as potential Arctic alien species was produced based on another Arctic project. Additionally more information can be found on the official SBC Arctic webpage.

Then we went on the hunt!

We set out to collect specimens of organisms both from the Arctic and from the origin locations of potential alien species, and send them to the laboratory to be barcoded. Arctic specimens were collected off the coast of Svalbard during a research expedition in July 2017, European specimens were collected in various locations in the Eastern Scheldt in the Netherlands in August 2017. Atlantic specimens were also requested from scientists in the US. These were all sent to the genetics laboratory of Wageningen Environmental Research in the Netherlands for DNA analysis.

Results of the project will be reported in 2017/2018 in a scientific publication and during presentations at relevant international conferences on the Arctic.

By developing a more comprehensive DNA barcoding method, we will be able to quickly and efficiently monitor the introduction of alien species in the Arctic region. This will allow more effective management and mitigation decisions to be taken before any efforts become futile. While prevention is always better than a cure, if alien species are introduced, early detection is essential to successful management.