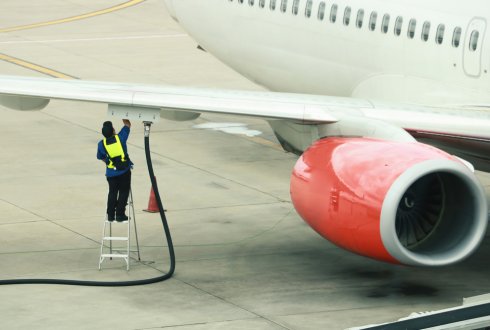 The possibility of making a promising airplane- type of fuel from the waste streams of potato production has already been proven on a lab scale. The objective of the BioJet Fuel project, which is being executed by an international consortium led by Wageningen Food & Biobased Research, is to define the conditions necessary to scale this process and achieve a viable production chain for biobased aircraft fuel.

According to European guidelines, all European transport fuels should be at least 20% biofuel in 2020. While the new legislation will not immediately apply to the aviation sector, this is expected to change as early as 2021. For airlines, applying the new benchmark would require the production of some two million litres of biofuel every year. “The BioJet Fuel project aims to give a boost to this development towards sustainable aviation fuel,” says Ana López Contreras, Wageningen Food & Biobased Research project leader. “We think we can develop a full-scale aircraft fuel production chain by using the non-edible side streams of potato processing as a raw material.”

It has already been demonstrated on a lab scale that potato side streams are suitable as starting materials for the production of acetone, isopropanol, butanol and ethanol (AIBE) via fermentation with anaerobic bacteria. The benefits are considerable. For example, the waste streams are cheap, widely available and suitable for fermentation. “An important advantage is also that the mix of products we obtained after fermentation can easily be reprocessed,” López Contreras continues. “A single chemical step allows them to be converted into hydrocarbons for diesel and, after hydrogenation, further into aviation fuel.”

To make commercial production possible, the fermentation process must be optimised so as to attain faster production and higher yields. Wageningen Food & Biobased Research is applying its extensive knowledge of fermentation technologies to this end. “We have profound genetic, biological and process technology knowledge of ABE or IBE production from biomasses such as organic household waste, straw, and grass,” López Contreras explains. “We are also well-versed in the link between the fermentation process itself and the separation of products. Because ABE and IBE are toxic to the bacteria, the final concentrations in a normal process are low. Removing these products during fermentation eliminates the toxic effect and greatly enhances production rates.”

Wageningen Food & Biobased Research is working together on the project with Pervatech.  In this cooperation, a specific membrane technology for separation, together with fermentation, is being used. In addition, evolution and genetic tools such as CRISPR/Cas9 are deployed to improve the resistance of the microorganisms to the products. A lifecycle analysis and a techno-economic feasibility study of the entire production chain are part of the project. These studies will be conducted by Utrecht University and SkyNRG. The result should clarify the sustainability gain compared to fossil-based jet fuel production routes.

Read more about this technology