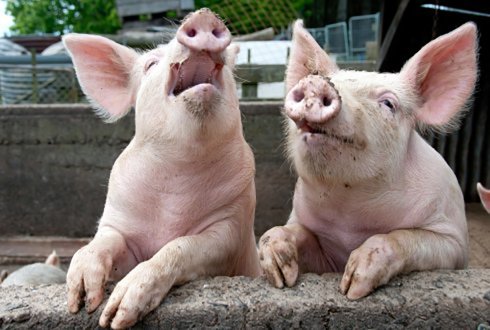 The Stichting Stadsvarkens (Urban Pigs Foundation) in Ede would like to know what regulations must be met to keep four pigs in an area of forest and feed on residual waste. The objective is to close cycles within a circular economy. In the Science Shop research the laws and regulations regarding animal feed and the sale of the meat in the case of town pigs were examined. In addition, the feeding of residual waste is discussed in relation to animal health.

Wageningen University students taking part in Academic Consultancy Training looked at relevant legislation and outlined four scenarios for keeping pigs in town on local residues. The scenarios have been screened by the researchers and they have added comments and advice. This resulted in different advice being given because, due to stumbling blocks, the initial scenarios were discarded.

The first scenario is the registration of all suppliers of food residue. This scenario does not provide a complete solution - not only would the suppliers have to be registered, but also the other links of the (mini) chain and also the other rules of law must be met. The researchers do not recommend this because this will lead to much paperwork and to a less flexible system.

The second scenario involves permitting the situation, complying with legislation as far as possible, but accepting where it is not possible on a few points. This could be done by accepting and feeding only primary produce (ie., unprocessed products), on a small scale. Or broader, by just feeding all residual waste streams to the pigs, including brewers’ grains and whey. This way the Stichting Stadsvarkens can show that they want to comply with the regulations, but cannot because the law does not provide for the use of this type of waste streams. However, condoning a situation that does not comply with laws and regulations, is not a structural solution and does not offer sufficient prospects.

The third scenario is the alternative outlet of the meat. Most important is that there should be no sale of meat. This offers possibilities, because this way the meat is taken out of the economic transactions (market), crucial to, amongst others, the Voedsel en Warenwet (Food and Commodities Act). Providing to third parties free of charge is also prohibited. If the persons involved in the foundation form an association, where members have joint ownership of the pigs, the members may consume the meat of their pigs.

The fourth scenario is applying for a pilot project. For a pilot, exceptions may be made for small systems. A procedure to obtain the status of a pilot project is a long winding road with limited chance of success. This scenario also does not provide an ideal solution.

Opportunity within an association

The objectives of the Stichting, namely a local circular economy and education, lead to another option. For the first purpose, forming an association is advised so that the meat of pigs may be consumed by the members. With this comes that a big part of the laws on food production do not apply, because there is no market. A permit is needed to keep the pigs, but because there will be no more than four animals, the light status applies. Stichting Stadsvarkens is then a RE-bedrijf (business level), where pigs are kept for recreational or educational purposes and eventually slaughtered. For educational purpose a foundation would suffice, which can supply education, promotion and expansion of legal frameworks, without the “burden” of an activity as keeping pigs.

Stichting Stadsvarkens wants to feed their pigs as much as possible on residual waste. The ration being supplied includes fruits and vegetables, whey and brewer’s grains. Potential residues are potatoes, grass and acorns and chestnuts.

a. Allowed
· Local and primary products where no processing is applied (Fruit and vegetables from the local greengrocer)
· Potatoes (do not feed raw)
· Legumes
· (Ripe) acorns and chestnuts (sweet and horse chestnuts)
· Grass