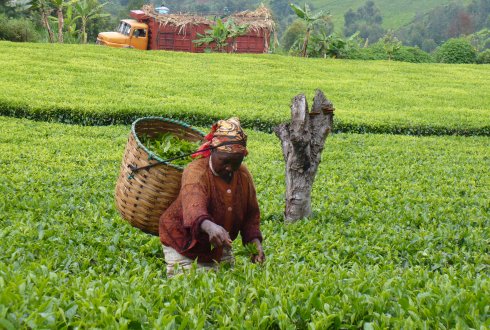 A major project is under way in Kenya with what are known as farmer field schools to teach tea farmers more about tea cultivation. Impact assessments by LEI show the success of the project, which Unilever is also involved in. It started with a pilot involving 121 tea farmers. In the end, no fewer than 96,000 tea farmers will have followed a training course.

Approximately half a million farmers grow tea in central Kenya. In the past, agricultural advisers told the farmers the best way to grow the crops. However, a pilot started in 2006 with 121 growers in farmer field schools. The farmers got together in groups of thirty for a few hours every two weeks for a year. They learned the best methods for weeding, pruning and fertilisation there, as well as e.g. how to keep records of how much fertiliser they used and how big the harvest was.

The pilot was set up by the Kenya Tea Development Agency (KTDA) and Unilever (Lipton). The aim was to make the cultivation more sustainable, improve tea quality and obtain Rainforest Alliance certification for nature and environment conservation and sustainable labour practices. Since 2010, the IDH Sustainable Trade Initiative in the Netherlands has been involved in the public-private partnership with KTDA and Unilever. Because of its methodological expertise and its status as a non-partisan organisation, LEI was asked to evaluate the impact of this cooperation.

After these evaluations by LEI, the project was extended from 744 farmers in 2007 to 18,000 farmers in 2012 and finally to 96,000 in 2015. Ultimately, all the tea farmers in the area will benefit from the project. “There is a spill-over effect,” says Yuca Waarts, a researcher at LEI. “If twenty per cent of the farmers receive training, the estimate is that eighty to ninety per cent will start working more professionally and more efficiently because they learn from the new applications their friends and neighbours are using.”

Waarts explains that the farmers who have received training spend less money on labour. “You also see that they are more likely to follow the manufacturer’s recommendations and use the knowledge from the training courses and their own records to help make decisions.” In addition, trained farmers do more to diversify their incomes by growing other crops as well as tea or by keeping chickens. Waarts says, “That is important because of the fluctuations in the world market price for tea, which hit the farmers directly in their pockets.”

Numerous studies have been done into the effectiveness of farmer field schools. In 2014, 3ie (the International Initiative for Impact Evaluation) compared these studies. The study by LEI was assessed as being one of the few studies that was underpinned by good methodology. “We are delighted with that recognition,” says Waarts, “and of course it’s nice to see that your research suddenly means that nearly 100,000 farmers are receiving training.”