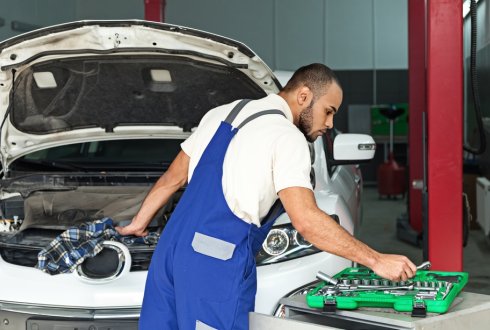 As part of the MOBIOSOL project, researchers developed not only new powder coatings but also a new industrial plastic based on the widely-used polybutylene terephthalate. The new material is partly made from biobased building blocks and is tougher and more versatile than traditional PBT.

The electronics and automotive industries make considerable use of industrial plastics such as PBT, a plastic that is related to the more widely-known PET. These substances meet stringent requirements. They are strong, can withstand impact, and are also heat-resistant. PBT is mainly used in industry for high-precision components in cars and electronic equipment. The material does a good job but does have several drawbacks. The plastic is somewhat brittle and it is based on crude oil. The MOBIOSOL researchers focused, among other things, on making PBT greener and tougher by using alternative biobased building blocks.

PBT is made from two fossil feedstock-based building blocks (butanediol and terephthalic acid). Together, these form a long polymer chain. Some of the polymers are crystallised and are embedded as small crystalline domains in a non-crystallised, or amorphous, region. This amorphous matrix is brittle below forty degrees Centigrade but the crystallised areas add rigidity to the material. Above forty degrees, the matrix becomes tougher and more rubbery. The researchers wanted to develop a new, partly biobased, plastic based on PBT that becomes tough at room temperature. However, incorporating a biobased building block following conventional chemical methods has a negative effect on the crystal clusters, leaving fewer and smaller crystalline areas behind. ‘As a result, the melting point drops,’ explains Cor Koning, Science Manager at DSM in Zwolle. ‘This, in turn, leads to a lower service temperature, which means the material is far less versatile.’

A special production process, developed by Eindhoven University of Technology, resulted in the best of both worlds: a strong industrial plastic based on partly biobased raw materials that can be used for a wide range of applications. In collaboration with Food & Biobased Research, Croda BV from Gouda developed and produced fatty-acid biobased building blocks for this purpose. ‘This collaboration makes efficient use of one another’s expertise and facilities to create dimer fatty acids that are pure enough to build into polymers,’ explains Daan van Es, senior researcher at Food & Biobased Research. ‘With this new method, we succeeded in incorporating the fatty-acid building block into the amorphous part of the PBT only,’ says Bart Noordover, university lecturer in Polymer Materials Chemistry at Eindhoven University of Technology. ‘As the building block is only built into the polymers in the amorphous part of the PBT, the PBT crystals remain unchanged.’ The result is a less brittle, tough plastic that is strong and able to withstand high temperatures.

‘MOBIOSOL has produced an extremely interesting biobased industrial plastic,’ Koning confirms. ‘The special production process leaves the crystallised areas intact, not only ensuring sturdiness, but also a melting point that is no less than twenty degrees higher than in a conventional production process.’ This enables the material to be used for applications in which it will become hot, such as in the automotive and electronics industries. There are, however, drawbacks to the method used. The costs of the fatty-acid building blocks are still high, for example, and the new method also requires a large amount of solvent. ‘We therefore need to look for a modified production method, without the need for solvent, if we want to produce this plastic on an industrial scale,’ Koning suggests.