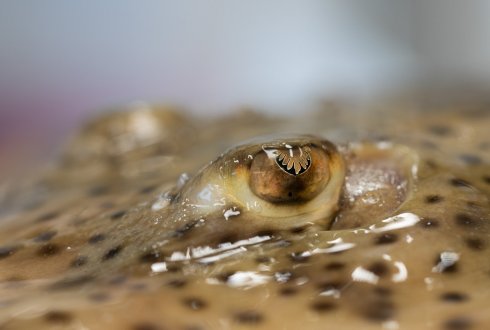 Can we register catches of rays with video techniques? Can we use DNA techniques to estimate how many ray are swimming in the North Sea?

Rays are a commercially important bycatch in flatfish fisheries and, as long-lived species, form an important part of the North Sea ecosystem. At the moment, little is known about catch quantities and population size of the different species of ray in the North Sea. This means that the advice on sustainable catch quantities by the scientists of the International Council for the Exploitation of the Sea (ICES) is based solely on data from surveys conducted by research vessels. As a result, the population estimates carry great uncertainties and the catch advice is therefore extra precautionary.

The management of fishing for rays in the North Sea is closely linked to the European landing obligation. This means that fishermen have to land the entire catch of species for which they have a catch quota and cannot return them to the sea. As a result of this policy, the ray stocks have become one of the main 'choke species’ (i.e., once the quota for rays has been fished, fishing for target species such as plaice and sole must also be stopped due to the risk of catching more rays if fishing continues). Initial estimates show that, in the case that all rays have to be landed, fishing for flatfish could be stopped as soon as the first months of the year. In contrast, fishers report observing an increase in the number of rays in the North Sea, which could be due to the sharp decline in fishing effort. However, researchers cannot confirm the observations of the fishers. Scientists cannot make good estimates of ray population sizes due to a shortage of data. As a result, ICES is currently unable to improve its assessments of how much ray can be caught in a sustainable way.

What are the core questions of the research?

We answer these questions in close cooperation with project partners from the Dutch fishing industry: VisNed and Nederlandse Vissersbond. With the results of the project, we are improving the scientific base for the management of rays and we are laying a foundation to improve this in the future for other stocks that are an important commercial bycatch.

For the collection of information about the catches of Thornback ray and Blonde ray in the shorter term, we use a remote electronic monitoring (REM) system. A REM system consists of an on-board computer, sensors and a closed circuit television system to make video recordings of the catches. The REM system is installed on four North Sea fishing vessels.

Within this project component, we also look at the technical feasibility of automatic image recognition. We investigate whether the cameras can also automatically recognize the species of ray that lie on the processing belt of the ship.

More information about this project component and the REM system can be found here.

We use DNA techniques to collect information for the assessment of the ray stocks in the longer term. New genetic techniques make it possible to establish the relationship between individuals in the absence of pedigree data. This project component provides the basis for an estimation of the ray population by combining genomic kinship analysis with statistical modelling of population dynamics.

As a first step in this project component, we decipher the genome of the Thornback ray and the Blonde ray. The next step is to map the relationship between animals within each species on the basis of 3000 DNA samples from rays (known as genotyping).

After the kinship analysis of the 3000 DNA samples, we make an estimate of the stock size of the Thornback ray and the Blonde Ray using a population-dynamic model. More information about this project component, genotyping, and this stock assessment technique of rays (known as close kin mark recapture) can be found here.