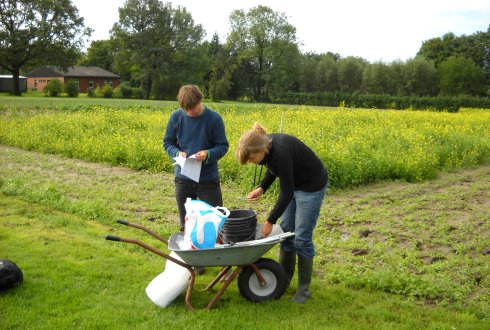 The closest interactions between a genetically modified (GM) crop and its environment take place in the rhizosphere and during the decomposition of crop residues. A potentially relevant hazard scenario is that GM crops affect these organisms, with consequences for soil fertility. This scenario will be investigated by the proposed research. In the rhizosphere, numerous bacteria, fungi and nematodes feed on GM plant roots and root exudates. During decomposition predominantly bacteria and fungi feed on GM plant material.

Nematodes constitute a diverse group within the soil fauna, feeding on bacteria, fungi, other nematodes and plant roots. This intimate feeding relationship with all major players in direct contact with plant roots and residues implies that GM crop effects in the rhizosphere and decomposer community will be reflected in the nematode community. Nematode abundance is high in virtually every soil. Unlike many soil organisms, nematodes can be easily extracted from soil and their ecological relevance can be assessed accurately. This makes them, both from a biological and practical view, an ideal monitoring device for non-target effects of GM crops. Recent advances in nematology, like the use of small subunit ribosomal DNA to detect families, genera and often even species, enable the use of nematodes with a much higher resolution than before. DNA barcodes are now being developed for individual nematode families, and quantitative PCR can be used to monitor changes in the nematode community at a large scale with unprecedented resolution.